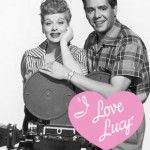 I was flipping through the channels the other night, looking for something … anything… worth watching.
With more than 500 channels on satellite, it’s remarkable how little there is to really watch. Take away the pay-for-view channels, the infomercials, the foreign language channels, the gaming channels, and there’s only a few dozen channels left. Not one to watch sports, I clicked past those, too, and find myself limited even more.
I enjoy watching the mini-documentaries on the History Channel, National Geographic and even the Military Channel, because as a journalist and video producer, I love learning about history and the world around us, but these don’t have worthy programming all the time, so… again… 500 channels and nothing to watch at 2-AM.
Then I stumbled upon an I Love Lucy episode and paused for a while, marveling that this 50-year old show has aired somewhere on earth nearly every single day since just a few years after the show ended. This classic black and white show was one of only three to end it’s run while still on the top of the Nielsen ratings, the other two being The Andy Griffith Show and Seinfeld, and ranked second behind Seinfeld as TV Guide’s list of greatest TV shows ever. [source: Wikipedia]
I remember years ago I was watching an episode of I Love Lucy and my son asked me, with a 6-year-old’s wisdom, why the world didn’t have color back in the “olden days”. I explained that the world had color, but TV didn’t and he said he’d never watch a “lame” show like that, which didn’t even have color. Today, in his 30s, I’ll bet he, too, knows almost every episode of I Love Lucy.
This made me wonder, will anyone care about some of today’s (“fake”) reality TV shows on mainstream TV in a decade… two decades… FIVE decades from now? Or will they (hopefully) fade into oblivion.
It’s interesting to note that what made I Love Lucy so good was timing: the comedic timing on the part of the actors, the well-written well-timed scripts from thescriptwriters, and the editing and pacing timing on the part of the technical staff.They had a simple 2-camera setup, basic high key lighting, a small 3-stage set, (living room, bedroom, and the Mertz’s apartment) and not much more. Reading the credits shows about a dozen names, no more. No fancy editing, swishing cameras, greenscreen, effects or multitude of names on the credits. Yet it, along with The Honeymooners, still entertains.
The classics are classic for a reason, those of us who make video should study the classics as well as current TV programming, to understand what it is that draws an audience. Making video is an art, and if you think you have the best movie ever made, but your audience isn’t as enthralled, you’re going to be stuck with a lot of unsold DVDs growing cobwebs in the basement.
From Wikipedia:
I Love Lucy is an American television sitcom, starring Lucille Ball, Desi Arnaz, Vivian Vance and William Frawley. The black-and-white series originally ran from October 15, 1951 to May 6, 1957 on CBS. When the original series ended, the show continued on for three more seasons with 13 one-hour specials, running from 1957 to 1960, known first as The Lucille Ball-Desi Arnaz Show and later in reruns as The Lucy-Desi Comedy Hour.
I Love Lucy was the most-watched show in the United States in four of its six seasons, and was the first to end its run at the top of the Nielsen ratings (an accomplishment later matched by The Andy Griffith Show and Seinfeld). I Love Lucy is still syndicated in dozens of languages across the world.
The show won five Emmy Awards, and received numerous nominations. In 2002, it ranked second on TV Guide’s list of television’s greatest shows, behind Seinfeld and ahead of The Honeymooners.