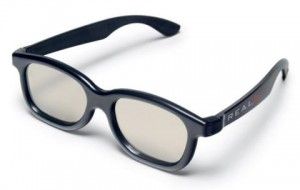 Ever since The Power of Love, which premiered at the Ambassador Hotel in Los Angeles in 1922, 3D film has been a reality. The film was shown in red and green anaglyph which meant that the viewer could see the effect by wearing glasses with different colored filters for each eye. Since that time, 3D has had various success. From 1952 to 1955, a string of 3-D movies known as the golden era of 3-D began with the release of Bwana Devil. Then, after three decades of decline, 3-D movies came back into the mainstream with IMAX and Disney Theme Parks making several successful 3-D films such as Honey, I Shrunk the Audience, Into the Deep, and Wings of Courage. Inevitably though, the technology declined again until 2004 when the animated film The Polar Express made 14 times as much money in 3-D than it did in 2D. Numbers like that couldn't be ignored by theaters which started fitting their theaters for 3-D. With the success of Avatar, which became the highest grossing film of all time over 15,000 screens are expected to be 3-D ready by the end of 2010. As much money as 3-D movies were making in theaters, home television and electronic companies started to wonder if consumers would also buy into the hype with their products at home. By 2010, many of the major manufacturers such as Sony, Toshiba, Samsung, Panasonic, and LG had made plans to introduce high definition televisions with 3-D capabilities by year's end. At the same time, popular camera companies such as ARRI, Panasonic, Sony, RED, and Canon started releasing consumer and professional level camcorders and cameras that could shoot in 3-D. Even network television got in on the craze by introducing broadcasts of events in HD such as this year's PGA Sony Open in Hawaii to viewers around the world.With 3-D technology blooming all around us, one has to wonder if it is just a matter of time before everything we see is in 3-D, or if this is just a second golden age in which history will repeat itself. After watching several 3-D films in theater such as Polar Express, Avatar, Clash of the Titans, and How to Train Your Dragon, I feel comfortable in saying that I feel that when it comes to theaters, 3-D is here to stay. The reason for this is because unlike the first golden age of 3-D in 1955 which faded away due to errors in keeping two projectors in sync, digital 3-D has the advantage of being controlled by a highly accurate software program. Also, due to the technology of polarized lenses rather than red and blue filters, the stunning colors of film are not noticeably affected by wearing lenses. Most importantly, since people go to theaters in order to get a superior sound, picture, and experience than they can get at home, 3-D seems like a natural progression for theaters everywhere. On the other hand, after watching several programs in 3-D on 3-D HD televisions, I have come to realize that 3-D has a long way to go before it is widely adopted in the home. 3D is a medium in which special care has to be taken in order to make sure both the video is in sync and looks good with depth applied to it. After seeing several sync and depth issues on 3-D broadcasts and due to the fact that one has to still wear bulky glasses in order to see 3-D properly, it still seems as if this technology is not ready for the home. Just think about how disorienting your uncle's shaky footage of your most recent family reunion would be if you had to view it in 3-D. As a result of hurdles like these, even though 3-D is here to stay for film, it has a ways to go before it successfully hits your T.V.