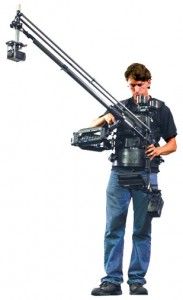 If making a camera move up and down stairs while looking butter-smooth wasn’t enough, Garrett Brown, inventor of the original Steadicam and cinematographer for Star Wars and The Shining, has now invented a new system which allows you to steady and boom your camera at the same time. At the 2010 National Association of Broadcasters conference, Garrett introduced Steadicam’s new Tango, a boom arm that attaches to a Steadicam vest system allowing you to steady your footage from floor to ceiling. The arm also has no power hungry parts and can do everything from booming to pan and tilt which are all controlled from the convenience of the base sled. This will allow Steadicam operators to achieve amazing dolly shots of walking feet, to get eye level with an actor as they walk, and to incorporate super long and highly dynamic shots into their films that have both dolly and crane abilities without having to set up a dolly track or jib arm. The one caveat however, is that you must have a camera which allows you to separate the camera control unit from the chip and lens such as the Panasonic POVCAM and AVCCAM control deck unit that Videomaker was able to test in our May issue, or on the flip side, an ever popular DSLR such as the Canon 7D due to weight restrictions.

After seeing this smooth device in action, we decided there could be no one better than the inventor of the product, Garrett Brown, to show us what this device was all about. Check out what he has to say and the Tango in action after the break.