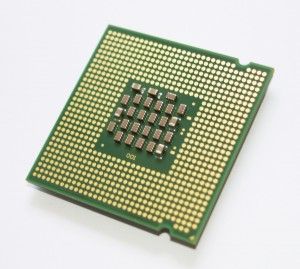 With the excitement behind the iPad and with the NAB conference just around the corner, it’s hard not to catch technology fever. As I’m sure you’ve heard countless times before, technology is rapidly changing. Ever since 1985 when Videomaker first started, the magazine has covered everything from reel to reel Super VHS editing to high speed laptops running advanced non-linear editing programs. With such a vast amount of change in so few years, it is hard not to wonder where it’s all going to go from here.

Moore’s law states that the number of transistors on an integrated circuit doubles every two years. Nowhere has this been more apparent than in the history of the CPU, or Central Processing Unit. Due to the miracle of silicon, brilliant engineers have been able to take a processor from 9.3 million transistors in 1995 to 2 billion in 2008. However, given today’s technology, engineers are fast approaching the day when it will be impossible to fit additional transistors on a CPU chip due to the fact that engineers are going to need nanotechnology to do the job. With that being the case, CPU companies have instead started to stack chips together with multicore technology. Unfortunately, this again can only last so long as you eventually run out of space in a computer to place these extra chips. As a result, researchers are turning to new materials to write with on CPUs. For example, researchers from IBM and Georgia Tech recently ran a silicon/germanium helium supercooled transistor at 500 GHz. Although this was only a single transistor, if IBM was able to match this speed with multiple transistors, computing power could advance a whopping hundred-fold. As a secondary measure, IBM also developed a graphene transistor that can operate at 100 GHz, or 20 times faster than some of the fastest processors in the market today with the advantage that graphene doesn’t need to be supercooled in order to run at faster speeds. At the same time, it can be manufactured in the same way as silicon chips are today. With graphene based chips, computers of the future could process HD video clips faster than SD clips process on current computers, meaning that you’ll finally have some time to be creative on a deadline.

Even with a fast CPU, computers of the future, much like computers of today, could be slowed down by other components such as cable speeds. Currently, data can be written and read over 6 Gbps SATA cables. While this is fast, it will eventually become a bottlneck to CPUs that can operate at close to a Terahertz. As daunting as this may seem, companies are already finding solutions to the data transfer problem. Back in September of last year, IBM demonstrated its Light Peak technology which is capable of delivering 10 Gbps of bandwidth. Eventually, the Light Peak cable could even hit 100 Gbps over the next decade. With these kinds of speeds, you could transfer a Blu-ray disc in less than 30 seconds to another hard drive or even over the web. That’s not all though, researchers at Alcatel-Lucent recently used similar optical technology to deliver speeds of up to16.4 Tbps to another business over 1,500 miles away. With technology like this, it would be possible to put uncompressed HD footage on a web server, and edit film or commercial projects in real time from the comfort of your own home.

The speed of change in technology is mesmerizing It will finally give video editors the world over the ability to do what was once only possible for render farms, allowing editors to make videos that are even more mesmerizing than the technology it was edited on.