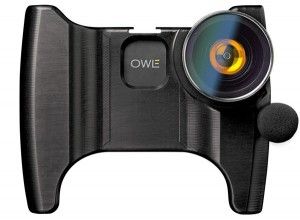 The number of cell phone produced videos hitting the web has increased significantly. While this is great and all, it has become painfully obvious that something needs to be done to improve the quality of these videos. Fortunately, thats exactly what the OWLE bubo has set out to do.

The OWLE bubo is a camera mount built specifically for the iPhone 3GS, in attempt to increase the video capabilities already existing in the phone itself. Its features assist in improving picture, sound, and stability, while it’s ability to support third-party accessories promotes customization and versatility.

Crafted from a single piece of solid aluminum with a smooth, black finish, the bubo feels good in the hands. It has a nice, sturdy weight without being too heavy or burdensome. Hand grips are located on either side of the body allowing for a more comfortable hold. The bubo comes with a silicon protective case for your iPhone, which holds your phone in the back of the bubo while you shoot. When youre finished, a square cut-out located in the center of the aluminum body aides in releasing your phone from the bubos grip.

Its hard not to notice the 37mm aluminum .45x wide-angle/macro combo lens positioned in the upper left corner of the device. The lens begs for attention and makes the bubo more than just a mount to grip. In addition, the lens is interchangeable with other 37mm threaded lenses.

The bubo supplies four threaded female mounts, one on each corner, for a vast array of tripod and accessory combinations. It also possesses a cold shoe mount for battery operated lights and additional microphones. The included VeriCorder Mini Mic is an omni-style microphone with a flexible arm that rotates 180-degrees enabling the user to point the mic towards the desired audio.

Putting the OWLE bubo to use is a fairly easy task. There are no batteries, no buttons, and no extensive instructional manuals to thumb through. All that is required of the user is to slip the iPhone into the protective casing and then into the back of the bubo, making sure both the iPhone and the bubos lenses match up.

Though this task is relatively easy, we did have to fidget with the protective case to keep it from covering the iPhone’s lens. There was also the issue of the phones power-off button being activated while trying to fit it into the back of the device. With a little practice this problem became easy to avoid. Despite the minor hiccups, putting the OWLE bubo into use was a snap and we were ready to test it in no time at all.

In our tests we compared video stability, picture and audio quality between the standalone iPhone and the OWLE bubo mounted iPhone.

The bubo won hands down in the stability test. Whether capturing a hand-held static shot, trucking shot or dolly shot the bubo’s added weight and hand grips allowed us to record a much steadier picture than with the iPhone alone. The hand grips also helped in keeping our fingers out of lens, which tended to be a problem with the standalone iPhone.

The VeriCorder Mini Mic is a nice addition to the overall device. The iPhones 1/8 jack made this mic easy to use, with the only required action being to plug it in. The addition of the mic increased the audio quality significantly. It was more robust than with the iPhone’s built-in mic, and dialogue levels were noticeably improved. The only drawback was the mic’s placement. Since the jack is located beneath the lens and in the middle of the left hand grip, it left us searching for a comfortable place to grasp the device.

The included 37mm wide-angle/macro combo lens was the frosting on the cake. Not only were we able to get almost twice the information in our wide-angle shots, we were able to capture an unmatched clarity in our extreme close-ups, as well. The bubos lens, without a doubt, is superior to the standard iPhone lens. The picture quality was equal to, if not better, when considering saturation and white balance.

Theres no doubt about it, the bubo has some weight and its unlikely youre going to get it to fit in your front pocket. However, if you shoot a good amount of video on your iPhone and youre looking for a fun, easy-to-use gadget to improve the quality of your cell phone videos, the OWLE bubo does a great job. With the ability to add accessories and to use the iPhones plethora of camera apps, theres no telling what youll be able to capture.

The OWLE bubo provides the iPhone’s camera with stability, versatility and increased picture and sound quality.

Julie Babcock is one of Videomaker’s Associate Multimedia Editors.