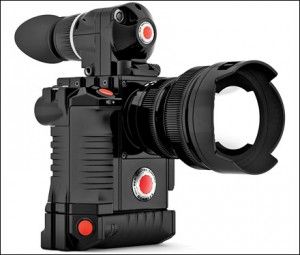 I’m sure we’re all familiar with the excitement that hits when someone is on the verge of discovering something new, when Christmas is fast approaching, or when a client tells you that your project turned out beautifully. That is the kind of head to toe excitement many videographers felt when Oakley billionaire Jim Jannard unveiled some astonishing details about the RED Scarlet camera back in 2008. It’s also the same kind of excitement that many digital cinematographers are feeling even now.

At first glance, this camera seemed to have it all: a 3K resolution recorded to a superior codec, virtually no compression artifacts, RAW recording, a highly modular design for added functionality, more dynamic range than you probably know what to do with, and a good price at $4,750 with a fixed lens or $2,750 without. Even with a $2,750 price tag, for a camera that can shoot at higher resolutions than anything else on the market, it was and still is a real steal.

Unfortunately, there is no fairy tale ending to this story. Unfortunately, in order to get the kind of fully functioning camera you’re used to, you would have to get a lens, a battery, an audio interface, a viewfinder, and grips for shooting. All together that high quality equipment can cost upwards of twenty grand – a very steep price for those who want to make great looking films on the cheap. Also, one of the biggest complaints about the RED camera is its post-production workflow. In order to have a chance at editing the footage from a RED camera, an editor would first have to make low resolution proxies from the original 4 or 3k files. Otherwise, these files are usually too large for any computer to handle successfully. As you’ve probably figured out already, this proxy rendering takes an awful lot of processing power and time which is often a real deal-breaker for getting projects done on a tight deadline. On the other hand though, super high resolution files above 1080p are a problem for any computer and RED founder Jim Jannard does have a knack for making very high quality equipment in which he spares no expense. As a result, you can expect to definitely get what you pay for with these products.

So is there a less expensive option that can do something relatively close? Well, the answer is…more than likely. We are probably all too aware of the benefits and downfalls of DSLRs in the market today (if not, be sure to check out more from our previous blog posts), however besides RED cameras DSLRs probably have the best chance of making any footage you shoot look just as good as film. With their long history and ubiquitous availability of interchangeable lenses, they have a real solid lead on the RED cameras. They produce great results at a good price, but are not without their own set of headaches. For instance, DSLRs have been notorious for having bad audio options with their lack of XLR ports and forced auto gain control. Also, most videos shot on DSLRs are highly compressed meaning a loss of details in dark areas and the introduction of artifacting. Also, DSLRs need accessories in order to give them a similar feel to the kinds of camcorders you are used to such as XLR inputs, shoulder mounts, and viewfinders. Also, let’s not forget the problem of the rolling shutter which can make vertical lines in your video look slanted when the camera is panned. This is due to the camera sensor scanning your image from top to bottom instead of all at once. This can really make video shot on a DSLR look unprofessional rather quickly.

After all of that, when it comes down to what a person should buy for shooting high quality footage, the question undoubtedly comes down to how you’re going to use it. If you are looking at making films, the RED camera, even with it’s slow transcoding times, is probably the best option since it modular, has all of the right accessories and shoots at the correct frame rates for film. However for standard HD videography, DSLR makers have a real advantage since they have good prices, cameras that are already on the market, and codecs that don’t require long processing times.

Undoubtedly, if and when DSLR manufacturers decide to fix some of the problems that have been outlined above, and if the good people at RED find ways to make their equipment even more affordable, we may very well be lucky enough to witness a new era of digital videography.