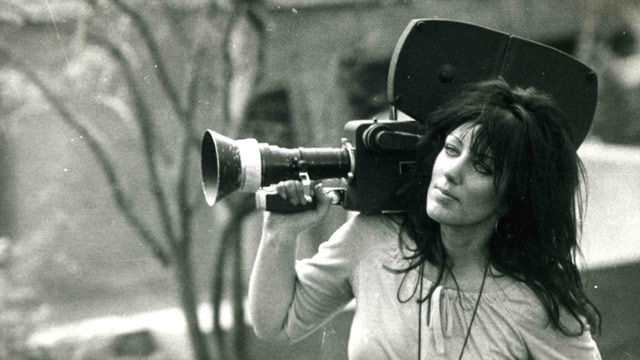 She was shot in the face by a sniper. That was in 1992 while covering the Bosnian Herzegovinan conflict. The shot didn't kill her, but the wound caused major structural damage to the bones in her face. After 2 years of reconstructive surgeries she was back in the field in 1994, capturing life at its deadliest: in the war zones around the world. Margaret Moth died March 21st, 2010, of colon cancer in Rochester, Minn., while in hospice care.

Margaret Moth was a tough woman -she began her photojournalist life in a time when women weren't often allowed to play in the game. Margaret was one of about 8 women shooting for CNN in the early 1980s. Women didn't sign up for this job. The equipment was heavy and cumbersome, the job was dirty and the conditions were extreme.

In CNN's infancy, its attempt to show Americans worldwide conditions other mainstream media wasn't covering appealed to this adventure-hungry young woman. Margaret was one who believed to tell the story best you had to get close to the action. She followed that dictum time and time again and during several conflicts when other journalists were running for cover Margaret was seen standing her ground, pointing her camera at the soldiers pointing their weapons back at her.

When she was shot in the face by a sniper on a random ride through the warzone in Sarajevo, she had been a photojournalist for more than a decade, and her story hit me hard like the bullet that blasted her face. I entered the photojournalist world at the same time as this amazing woman and found out that it was an incredibly challenging field both as a woman and as a camera person. I was not welcomed in the game by most of the guys I was working with. I was the only woman "shooter" at my TV station and my gear was often sabotaged, my assignment editor gave me only "fluff" stories. My enthusiasm was challenged daily by comments such as the one from a fellow shooter saying women couldn't carry the big cameras and shoot news because our breasts got in the way.

This was in the 1980s when I thought all that "women can't do it" nonsense was over. Fast-forward 10 years and I had been shooting for a decade, was an award-winning photojournalist, was one of 3 women shooters in our television market, and much, (but not all) of that adversity was past, when I heard on the wires about Margaret Moth being shot. I soaked up every story I could find about Margaret's career and accident.

She should have died from her wounds but didn't, not only did she tough it out but she returned to the job and the warzone. Her career spanned 4 decades, she won several awards for her work and I realized she adopted a similar work-costume as I: cargo pants, loose shirts, military boots and a wild hair styles. She became my mentor in a world where there weren't many mentors for women like me with jobs like mine.

Now that I work with Videomaker, I try to make it a point to mentor anyone: women, men, children and seniors starting out a new hobby or career, anyone wishing to enter the field of videography. It's now a field where anyone can play the game, and we are all in this together.

Carrying a camera used to be an elitists job – we were special, we were the glitterati, we lived life in the fast lane, we were honored and envied. I'm glad that world has changed, that we can all share in this incredible field of capturing history, life and every day events through the eyes of our cameras. In the end, it wasn't the danger of her career that took her life, but something so simple that plagues those from all walks of life: cancer. In a CNN interview Margaret Roth said: "Life is sort of like a game of tennis. You have no choice over how that ball comes to you, but its how you hit it back that counts."

Whether covering a war or doing something much less dramatic, every video creator inevitably puts a a bit of herself/himself in our work. The lesson we can take from Margaret Moth is to persevere, to take on any challenge and succeed. It will be reflected in every frame we shoot.