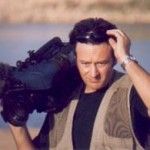 Gerard Ungerman, recognized by AFI, theAmericanFilm Institute, among others, for outstanding work in the world of documentaryproduction, will be teaching the upcomingDocumentaryProductionworkshop for Videomaker at our headquarters in Chico California this March.

Pulling in such high-profile narrators such as John Hurt, Dustin Hoffman and Edward Asner, Ungerman’s films have been featured in many international festivals and have been broadcast all around the world.

Ungerman does his own fund-raising, allowing him to be completely free of outside influence in telling the stories.

Ungerman’s bio states: His belief is that true democratic media should not be controlled or filtered by powerful interest groups, be them commercial or political. Determination and skills learned along the way have allowed him to give high production value to otherwise low-budget projects and to bring international visibility and recognition to controversial stories that commercial news and entertainment would not touch.

[image:blog_post:13621]Ungerman created his production company, Free Will Productions, in New York in 1995. Formerly a print-media journalist with a military background, Ungerman’s global travels have taken him to such places as the jungles of Peru and the oilfields of Iraq to find the truth about conditions in areas that aren’t covered by the mainstream media.

There is still time to sign up for this 3-day extensive class on Documentary Production taking place March 19-21, 2010, but this class will be limited to just a few, due to the content size. Check out the details at:http://events.videomaker.com/