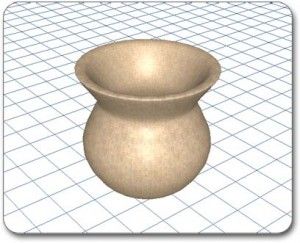 If youve ever tried to model realistic 3D objects before, then you probably know just how agonizingly hard the process can be. Just trying to get simple things like lights to fall correctly on objects can be enough to make your hair go gray. If that's not enough punishment, trying to animate those objects with a good degree of realism can suck every last bit of fun from any 3D project you have. For those of us with little experience in 3D applications it can seem as if scaling Mt. Everest would be less daunting a task than modeling and animating realistic plants, animals, and objects in 3D. As a result, I'm sure many of us who have some experience modeling and animating have at one point asked the age old question: Isn't there an easier way?

The good news is that there are options that can help us gain back whatever part of our lives (and minds) that we lost to modeling and animating in 3D. The simplest option is to stitch together a series of photographs to make a 3D model out of a real life texture. This is by far the preferred way to model since pictures allow for more ideal shooting conditions, higher resolutions, and larger dynamic range than most video cameras are capable of. This leads to a crisper and more scalable texture for the model that you end up with. Plus, using photographs means that lighting will be taken care of, freeing up a tremendous amount of time. Check out the kinds of software available after the break.

There are many companies with great software for making 3D models out of photographs and best of all, many of them are free. On the plug-in side, check out Videomaker's third party plug-ins article: http://www.videomaker.com/article/14768/. On the software side, Photo-to-3D has free software on its website allowing a person to take just two photographs to make simple 3D models. For something even more heavy duty you can check out Strata's Foto 3D which comes with a special calibration mat to make sure that any photo you take can accurately be represented in 3D. Best of all, Strata can actually export straight from Photoshop into many popular 3D software formats.

Photos aren't the only media that can be converted into 3D objects. Software companies have even started to realize the potential of video to make realistic 3D models and animations. Even though video generally isn't as high of a resolution as pictures are, there are some major advantages to using it for modeling. Typically the biggest advantage has been the ability to track your object in a real life video scene much like Punchcard's VideoTrace software can do. However, even more amazing software has recently been released that allows you to not only track and make a 3D object from video, but also to animate your object based on the movement of your object in the video. Universities from Cambridge and Bath have written a couple of amazing 3D modeling programs that allow you to shoot footage of objects such as a trees or a buildings and have them both modeled and animated based off of the object's natural movements as seen in the video below.

Animating 3D objects using motion from video is one of the greatest pieces of news that a time-conscious animator could hear…and with all of the crazy advances in technology, it may even be the new standard for the future.