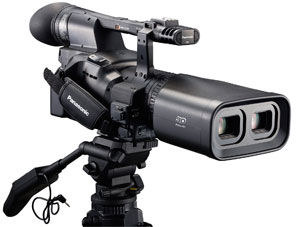 Easier to Use
Current 3D systems are large-scale setups in which two cameras are fitted to a rig in parallel, or vertically intersect across a half-mirror. Separate recorders are also required. In Panasonics new Full HD 3D camcorder, the lenses, camera head, and a dual Memory Card recorder are integrated into a single, lightweight body. The camcorder also incorporates stereoscopic adjustment controls making it easier to use and operate.

The twin-lens system adopted in the camcorders optical section allows the convergence point** to be adjusted. Functions for automatically correcting horizontal and vertical displacement are also provided. Conventional 3D camera systems require these adjustments to be made by means of a PC or an external video processor. This new camcorder, however, will automatically recalibrate without any need for external equipment, allowing immediate 3D image capture.

Solid-State Reliability and Workflow
Right and left Full HD video streams of the twin-lens 3D camcorder can be recorded as files on SDHC/SD Memory Cards, ensuring higher reliability than on other tape, optical disc, HDD or other mechanical-based recording systems. This solid-state, no-moving-parts design will help significantly reduce maintenance costs, and the 3D camcorder will be better able to perform in extreme environments and be more resistant to temperature extremes, shock, and vibration.

And users will enjoy a fast, highly-productive file-based workflow, with instant, random access to recorded content; easy plug-in to both Mac and PC-based platforms; and longer recording capacity.

* As an integrated twin-lens Full HD 3D camcorder capable of recording Full HD 3D video to Memory Cards. As of January 2010 (based on our investigation)
** The point at which the left and right-camera lenses optical axes converge

Development Background
Movie companies and content producers are eager to produce more 3D content. 3D video is set to become a mainstream motion picture technology. In response to the resurgence of 3D movies, in September 2009, Panasonic proposed the worlds first 3D home theater systems, based around 3D-enabled Blu-ray Disc players and Plasma TVs (announced and exhibited at CEATEC 2008). In February 2009, the company established the Advanced Authoring Center (within Panasonic Hollywood Laboratory) at which 3D movies are authored for replication on 3D Blu-ray Discs (announced at CES 2009). Currently, producing 3D movies is a painstaking process. Panasonic intends to promote the production of high-quality 3D video content by accelerating the development of 3D video production systems designed to boost production speed and efficiency.