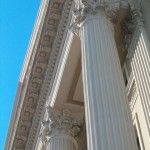 One of the most confusing topics we receive questions about is on the legalities of using copyrighted material. Sometimes it seems to be OK, other times it doesn't. Sometimes we'll get a letter complaining about a take-down notice from YouTube because the writers used 10-seconds of a popular song for their children's birthday video, while we report in other areas of our content about viral videos of full songs getting millions of hits.. and the videos are allowed to stay up. Yes, the copyright law are as clear as mud, I like to say.

About 3 years ago, shortly after the huge internet video explosion began, we started providing readers with "What's Legal", a column that attempts to address legal issues for video producers, which is written by Mark Levy, an attorney who specializes in intellectual property who is also an accomplished video producer. (At the end of this post are links to a few of his columns, a search in our site for Mark Levy or What's Legal should supply you with more.)

Recently, Mark wrote on the subject of Fair Use versus Copyright Law and we received a letter from reader Eldridge Walker, retired Vice President of Music Clearance at Paramount Pictures. His question, and Mark's reply are good points to consider for all video producers, so I thought I'd let you in on the entire exchange in our blog today.

Mr. Walker writes: Love your magazine and have for years. However: You may want to have Mr. Levy, of Whats Legal clarify a point in his column in the December 2009 issue. He states: "As of January 2009, the only sound recordings that are automatically available in the public domain are those published before 1923 and those published between February 15, 1972 and March 1989 without a copyright." This may very well be true – of the recording but what about the material on the recording? If music, it will also have a copyright which would have to be investigated and possibly cleared also. – Eldridge Walker

Attorney Mark Levy's reply: Mr. Walker is exactly correct. When it comes to copyright law, things are often more complicated than they look. As a video producer, you should be aware of the distinction between a work, such as music or lyrics, and a recording of the work. If you wish to use a recording of, say, Beethovens Ninth Symphony, you will not have to obtain permission from Beethoven, since all of his compositions entered the public domain many, many years ago. But you will have to obtain permission to use the recording, which, presumably, was made more recently — after 1922, to be precise.

How does one get around this? Another question we get is "I'm ONLY making a video that I will NEVER upload, who's to say what music from my own library I can use?" We would hope the Copyright Police won't stake out your neighborhood or place spyware on your computer, to see if you're following the rules.

I personally have made many videos using popular music for family and friends. I will never upload them to YouTube or any other site, in fear of that take down action. On the other hand, a while back I made a small documentary on a local historical landmark for a group that I thought only wanted to use it for in-house promotions, but discovered, later, they want to place it on their website. I have been trying to hunt down people interviewed for releases, get permissions from the historical society for photos used, and re-lay all the music from a royalty-free library.

What's the solution? If you're making a documentary, get all your ducks in a row BEFORE you hit that record button for the first time. If you're only making family videos, well, I won't tell if you won't. (And I'm getting pretty good at figuring out how to use music libraries and music creation software.)

So tell me, what work-around have YOU come up with? What solutions have YOU managed around this muddy issue?

This link will take you to our page of What's Legal columns that look at issues on these subjects I've addressed today.