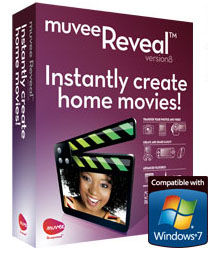 For over eight years, muvee has been creating automatic video editing software and services for consumers. muvee Reveal version 8 surpasses all previous programs in the muvee family with enhanced personalization features, sharing options and editing capabilities.

In three steps, consumers can create professional-looking home movies in minutes by selecting photos and video, adding the music of their choice, then choosing a style. With patented media analysis and production algorithms which include face, scene and motion detection for videos, and beat and emotional analysis for music, muvee Reveal automatically selects the best scenes, adds effects and transitions according to the style chosen, and syncs everything to the beat and emotions of the music.

When we sat down to design muvee Reveal version 8, we were adamant about adding ever more powerful personalization and sharing features without complicating the user experience. Now users can upload to Facebook and Youtube in a single step, brand their muvees for blogs and vlogs by including their own logos, and even string together favorite artist’s choruses to create that unique, personal, professional-looking home movie along with their personal music mix, says Terence Swee, CEO, muvee. We can now actually say it’s enjoyable to both create and watch home movies!

muvee Reveal version 8 comes complete with 10 styles, including a new Kinetic style. Styles allow the user to enhance the mood of their home movies with special effects and transitions. Additional stylePacks can be purchased at www.muvee.com.
muvee Reveal version 8 is available for $79.95