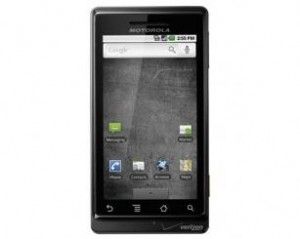 We got an early release of Motorola’s new Droid phone and took it for a quick test drive to see if it’s got what it takes to be a competitive camcorder.

Charlie Fulton, our Tech Guru had the chance to play with the phone and was surprisingly pleased with the quality of the video it recorded. The Droid can upload video directly to YouTube, so when you shoot it now, you can share it with the world in only seconds, a cool feature if you’re the first one to catch the return of Elvis from an extraterrestrial spaces-ship. Now that’s a video the world will want to engage in!

The Droid runs with Google’s Android 2.0 operating system and has all sorts of cool features, besides, of course, operating as a mobile phone, we assume it’s main function and unlike the iPod’s exclusive user-agreement with AT&T, the Droid operates on the much larger Verizon service. Read our First Look take on it here . Read more about the Droid in PC World‘s review.

As always, mobile phones that shoot video can’t shoot as well as traditional camcorders can, but for fun and a quick way of sending video to friends and family, you can’t beat the instant features mobiles offer. To learn more about shooting and uploading the best mobile footage possible, watch for stories in an upcoming issue of Videomaker. Can’t wait? Check out these Mobile phone shooting tips stories. “Stellar Video: Just Smaller” and “Shooting for the Very Small Screen” and “Video 2 Go“.