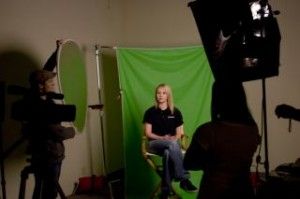 How many times have you heard or uttered the phrase The Show Must Go On! in your video-producing world? It gets our blood pumping to know we can make the impossible possible.

This weekend we hosted one of our Basic Production workshops, and launched our newest class as well: our 3-day intensive Lighting Workshop. Everything was going well until about 11:15 in the morning when everything raced to a complete halt.

Apparently, a mylar balloon escaped some little childs grasp somewhere downtown and hit a power-line that took out power to a huge electrical grid that encompassed several city blocks east and west, and everyone working in our studios were washed in complete darkness.

So, being the jump-in-and-get-it-done video producers that we are, after we figured it wasnt the lighting class that caused the power outage, (hey! That many lights in the wrong hands can cause all sorts of havoc!) we learned from Pacific Gas & Electric that the power might be out for hours, so we had to take matters in our own hands.

[image:blog_post:13739]Tom, Charlie, Julie and I took all the equipment we had outside, to do an impromptu show-and-tell session with the Basic Production class. Andrew Burke, our lighting class instructor, took his class outside to teach about reflectors and diffusion and how to make that big light-source in the sky work for you instead of against you.

We started doing the Show-n-Tell session in the June workshop, and I think its been a great hit. We have all this gear that we get for review, sometimes we have to send some of it back, but often it sits in our closet until we need it for a photo shoot, a video shoot, or workshop. I got to thinking there’s a lot of stuff many of our attendees read about but never get to see like under-water housing, suction-cup car mounts, and all sorts of lights, mics and stabilizers. So I thought, why not show them off?

The outdoors Show-n-Tell really worked out well, and after that hour session, we sent the class to lunch. When they came back, the power was back on and the rest of the day went off without a hitch. Oh, well, actually, the power surge blew out the cheap DVD player we were using for our seminars, so Charlie had to lickedy-split hook up a laptop to get us through the rest of the day, but that was a minor hiccup and proved that the show WILL go on.

You can see the two videos that the Basic Production class made online at our website. “In Search of the Soundman” and “The Flashback“.

Tonight, theyre predicting a HUGE storm here in Northern California, so were expecting to have another power outage soon. It happens all the time here with our antiquated power grids and over permissive housing in-fill in this once sleepy small-town that is becoming a booming metropolis too quickly to keep up with the power demands! Stay Tuned!