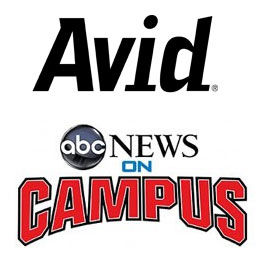 Avid teams with ABC to give journalism students the opportunity to practice production, editing and distribution aspects of broadcast journalism in their ABC News to Campus program. Read on for more details.

Avid has joined forces with ABC News to participate in ABC News On Campus – an innovative program designed to give tomorrows most promising news professionals an opportunity to practice real-world news gathering, production and broadcasting. ABC News On Campus students capture, produce, edit and distribute news stories in their local area, which are often featured across ABC News programs. This year, students from six universities, including Arizona State University, Syracuse University, University of Florida, University of Nebraska-Lincoln, University of North Carolina (at Chapel Hill), and University of Texas (at Austin) will learn the inner workings of a newsroom, while using industry-leading solutions like Media Composer video editing software to create news stories. The program is in its second year.

“ABC News On Campus is committed to preparing students with the skills they need to walk into any newsroom in this country and excel among colleagues. We are thrilled to have Avid participate with us on this project. Exposing the students to the same technology that we use in our own newsrooms allows them to become proficient in the field and keep up with the fast pace of the broadcast industry,” said John Green, ABC News Executive Producer of Special Programming and Development. “For many graduates, this real-world experience will be a tipping point in securing a desired job interview.”

Currently, 10 students at each bureau location, chosen by ABC News and university faculty, are receiving training from the most seasoned broadcast journalists on Avids state-of-the-art media production solutions, including Media Composer software. Last years program was a success, with eight participants in the 2008 ABC News On Campus program securing jobs within the broadcast industry upon graduation. Meghan Lisson, a Syracuse University student from the programs inaugural year, landed a job at NBC:

“Working in college as part of ABCs student program and with industry standard solutions like Media Composer gave me the edge I needed to score a network job in a tough economy. My newsroom skills with Media Composer not only set me apart from the competition, but gave me a major leg up in the professional world,” said Lisson. “With each successive sequence I cut, and each package I produced as part of ABC News On Campus, I was able to further hone my skills and streamline my understanding of broadcast workflows. So often you can be limited by your tools when on a tight deadline; having top-of-the-line, professional and portable Media Composer software allowed me to craft pieces I was proud of every single time.”

Gary Greenfield, chairman and CEO of Avid, said, “It is imperative in todays highly-competitive job market that students get real-world experience in the newsroom using industry-leading solutions like Media Composer. We commend ABC for developing this program and we continue to enjoy being a part of an effort that will expand the skill set and opportunity of tomorrows leading journalists, producers and news executives.”

Reprinted from an Avid press release