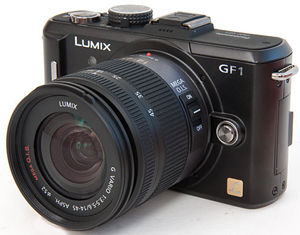 Today, Panasonic announced the new LUMIX DMC-GF1, the latest addition to the award-winning LUMIX G Series, which debuts as the worlds smallest and lightest system digital camera with a built-in flash*. The LUMIX DMC-GF1 distinguishes itself from previous models with its elegant, compact design reminiscent of classic film cameras, yet builds on Panasonics success with the revolutionary LUMIX G Series of digital interchangeable lens system cameras based on the Micro Four Thirds system standard. With its compact size, user-friendly design and ability to record High Definition (HD) video and take professional-quality photos, the LUMIX GF1 continues to redefine digital photography standards.

For more information about Panasonic and its LUMIX G System cameras and accessories, please visit www.panasonic.com/lumix