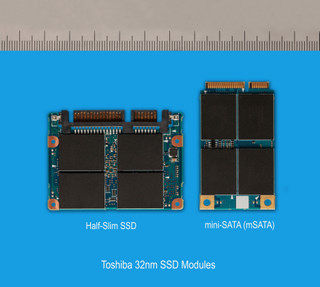 Toshiba has announced a new, tiny SSD that will almost certainly find its way into next year’s flash-based camcorders, making them even smaller than this year’s already-small flash-based camcorders. They are also one of the first devices to use the new mini-SATA (mSATA) device connector. Sizes are 30GB and 62GB, and volume production will begin in October.

Why so small? An advantage to having such a small device is less weight and less power consumption (typical read power consumption is 1.3W, write is 1.8W.) This will probably lead to longer battery life for the end-user.

The advantages to using SSDs for video are many: they’re pretty fast, they’re more resistant to impact than a hard drive, the capacities are nearly as big (but their physical size is a fraction of that of a hard drive), and the cost difference is becoming less and less by the day. Makes me wonder when there’ll be a camcorder with an eSATA port, to get your video off to a computer that much faster? It’s probably inevitable, really.