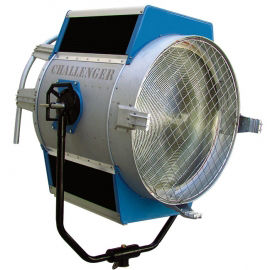 Reprinted from a DADCO press release

At last – the 24kW Discharge Light has arrived! DADCO, manufacturer of the Sunray line of HMI type discharge lighting fixtures for motion picture and television, has introduced two new 24kW discharge light fixtures, the groundbreaking Challenger “SunArc” and the G4. Both the industry-leading 24kW Challenger and the G4 are designed with a host of advanced features, including a unique cost-effective convertibility feature allowing the fixture to readily operate as either a 12, 18 or 24 kW light.

The “Challenger” and the “G4” 24kW lights are the first single source discharge lights that outperform the famous D/C powered carbon burning arcs, once the staple of the motion picture industry. For more than thirty years attempts have been made to perfect a single source fresnel light that would match the output of the carbon burning arc. The Challenger and G4 meet the challenge producing 30% more light output than the 18kW discharge light. Both models are E.T.L. listed to U.L. standards and built by highly-trained IATSE Local Union craftsmen.