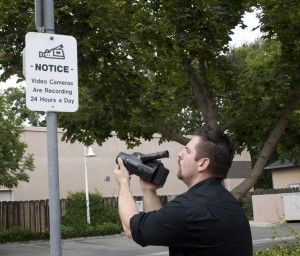 All of us have memories that will stick with us for the rest of our lives. Some are more powerful than others. For me, a lot of those memories have come behind the viewfinder of a camera. When I first started shooting videos, I was just a wee lad of about 7 or 8 years of age. I remember playing with the camera and being so confused and amazed with how the technology actually works. The same type of confusion that a dog feels when it looks in a mirror. Yup, I just compared myself to a dog… That is confused.

“Time to turn off the camera because this shoot is over.”

Once I hit high school, I developed a passion for loud aggressive music which would lead me to shooting music videos. This must have been my first true crazy experience shooting video.

I remember that this particular video was set to a post-Nirvana era noise jam and the scene called for shots of junkyards, and someone jumping trains. Naturally, with no budget and 1 camera the solution was to set up a tripod and jump a train right!? … Right? First I wanted an empty shot of some tracks, with the subject lying on them and pretending like he was waiting to hitch a ride. Got those. As a matter of fact, it was a perfect shooting day.

When some cops rolled up on me to make sure I wasn’t the arsonist that they were hunting down they even got on camera for some shots! So, the main event. It was time to set up the tripod on a broken step ladder to shoot through the train cars and catch me jumping in. Well, the train came. But not before my foot got stuck in the tracks after setting up the tripod.

As it inched closer, instead of thinking about how my life was about to end I just kept thinking about how my framing is off and I need to adjust the shot. The train started to honk, the tracks were rumbling. I now realized, after examining my predicament, that it was a brave shoelace that had hugged itself in between the track. I loosened my shoe and 3 seconds before impact jumped behind the train. Then I decided it was a good time to get my shot. So I hopped it, waved to the camera and jumped out the other side.That’s when I knew it was time to turn off the camera because this shoot is over.

“Did that Cowboy just spit Chaw on me?!”

Years later in formal training, I was working on a shoot as part of a remote video production course I was attending. We would shoot live events with a old broken down production truck, with old beat up equipment and learn about the various aspects of live tv production. It was very challenging and a great learning experience.

On this particular evening, we were capturing the beauty of a Rodeo. Not just any rodeo, this was a national championship qualifier of some sort and the state championships. So this was a very serious contest and the cowboys competing were not happy campers. My job: operating the hand held while training a new student how to pull cable for the cameras at the same time.

Well the first interesting visual happened to be the bulls getting zapped by the cattle prod which would send them into a violent rage of kicking and goring. As a camera op, I wanted to get the perfect shot and I finally found it; right in between the holding bars. A nice big pan that starts with a close up on each bull’s eye, right up until the point that the cattle prod zaps away and then in as smooth of a motion that I could, I would pan over to the Cowboy’s hand and begin to zoom out. Sounds perfect right? Well, it was until the bull decided to gore the lens! What happened next is the stuff of legend.

The force of the gore sent me back into a cowboy cheering on his mate. As I bumped him the creeky bench evaporated from underneath us, and I fell back (still shooting I might add!) But it just so happened that my cable puller, who had been getting heat from the cowboys all night for standing in their line of view, was in the process of being spit upon by a cowboy and was furiously scrambling to apologize for being in an angry cowboy’s way.

Needless to say, nobody was behind me. Nobody. And as I fell, I began to realize that what I had been stepping in all night was not mud! Once I took that flat bump, I looked up to see the viewfinder and then I realized that yes, I had captured the shot albeit now I was covered in turd. I looked at my cable puller expecting to see the concern on his face, instead he screamed, “Did that Cowboy just spit chaw on me!?!”