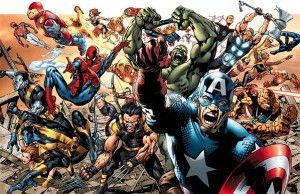 It only took them $4B. And now Disney, owns more superheroes than Stan Lee. What does this mean for video enthusiasts? Well you can all probably expect a ton more superhero movies, as if there weren’t enough already. Except this time Wolverine is going to be wearing those cute little Mickey Mouse ears! With access to over 5,000 characters Disney is hoping to make even more profit off television and merchandise sales. Or as Disney President and Chief Executive Robert A. Iger put it, “We believe that adding Marvel to Disney’s unique portfolio of brands provides significant opportunities for long-term growth and value creation.” Disney’s big success has came with the young pre-teen demographic due to shows featuring the Jonas Brothers and “Hannah Montana.” They are hoping to bring in Marvel’s stranglehold on teen males as it has struggled to bring them in. “It helps Disney add exposure to a young male demographic it had sort of lost some balance with,” Disney said. One thing is for sure, Marvel has definitely lost it’s edge for me. Sure, the Fantastic 4 movies didn’t help but this is really the end. Good bye cruel comic book world, hello Disneyland!