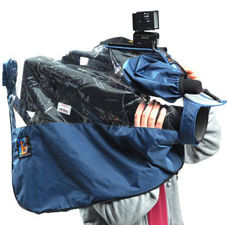 Reprinted from a Petrol press release

Videotaping Tornadoes and Hurricanes can be a daunting task, just ask Richard Campbell who has shot video in 25 named hurricanes and spent five weeks on assignment for The Weather Channel with a tornado researching crew.
Heres what Richard had to say about the Petrol PRC-25 Raincover; When youre in a hurricane, youre in serious, driving rain, it’s coming down, its coming at a pretty good force right at you. So you not only need to have something to keep the top of the camera dry, you also have to have something that comes around and protects the rest of camera.
To him, Petrols extensive use of zippers rather than relying on just Velcro material to fasten the Raincover is a major advantage.
After a bit of time, Velcro starts to wear, and leak through, he said. As the Velcro comes loose, wind gets in and opens it up more, and can lift the rain cover right off the camera. Theres nothing worse than trying to put your rain cover back on in the driving rain.
What I like about the Petrol Raincover is that it has a zipper that comes around all the way underneath the camera, so theres no space that wind can get up into to suck the rain cover off the camera.

Another benefit for Campbell is the hotshoe connector at the rigid front hood section. Most traditional covers have to be opened to access the camcorders hot shoe when attaching an on-camera light. The connector features a -20 threaded bolt that is accessible through a water-proof opening at the top of the PRC-25. Campbell explained, I can utilize that hotshoe connector to mount my light on the outside of the Raincover without having to open it.

Campbell found access to the camcorder eyepiece to be another strength of Petrols design. Theyve eliminated all the Velcro around the viewfinder, and replaced it with a zipper. Its so much easier to get that on and off. He said hes also able to change battery packs and install a wireless microwave transmitter to the back of the camera easily using the zipper system.
[image:blog_post:13824]A built-in lip over the top of the front of the lens is yet another feature Campbell appreciates. That made a huge difference the other day. We were taking video in very heavy rain, and I didnt have to constantly wipe my lens. And then we had a hailstorm. That lens cover really did a tremendous job keeping the hail off the camera lens.
Campbell says the Petrol PRC-25 Raincover protects against more than just moisture, which was particularly apparent during his recent tornado coverage. A couple of days ago, before the storm kicked up, we actually had a lot of wind blowing up dust out in a field. If its not raining its blowing dust, dirt and debris all over the place. So its not just really a rain cover, its an all-weather cover.

To find out more about Petrol bags and raincovers visit www.petrolbags.com