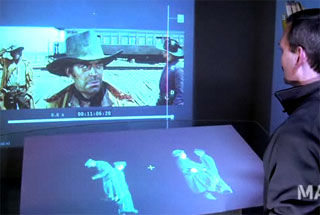 Check out this video we found of a demo on the Making Of site. It’s an editing system called “Tamper” being created by Oblong Industries, a software company that’s looking into the future with a technology called G-speak. John Underkoffler, the creator, gave a demo of this amazing system at this year’s Sundance Festival.

The editing system’s design consists of human interaction by way of hand gestures, wearing special gloves. The user waves, flaps, grabs or spins the media being manipulated until the desired look is achieved.

The creators worked on this futuristic computer for scenes in the movie Minority Report, and it’s similar to a scene you may remember from the recent Star Trek movie in which Romulan Ayel throws an image of Spock at Captain Pike and asks if Pike knows this man.

This futuristic clip looks like a great way to play video games, but editing real movies seems dubious… as you still need the fine-tuning skills for all the multi-layers of dialog, music, graphics, and video, but it looks like a great way to compile a 3D look at what your movie might become after some intensive tweaking. Either way, the video geek factor is way cool. Check it out.