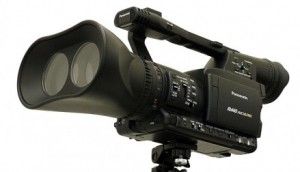 When we hit NAB, there was this feeling in the air that the new & the future will be 3D. Panasonic actually revealed their take on the issue at NAB, and recently I was thinking about how impressive this technology actually is. So I thought that I’d mention the prototype they announced as the Panasonic 3D Full HD camcorder.

It’s looks crazy and it shoots crazy but will it work?

According to Panasonic, the camera will operate by placing two cameras side by side into a single chassis. Most 3D movies are generally done by mounting two cameras together, so this would be a slight variation with the same idea. The video from both camcorders are then linked together and exported as 3D video.

So I’m not entirely certain if this is a new technology that I’m interested in seeing get developed. Why to be honest? Why should I? What benefit does 3D have? I feel like there is no point, but who am I really… Just a guy that shoots video every single day.