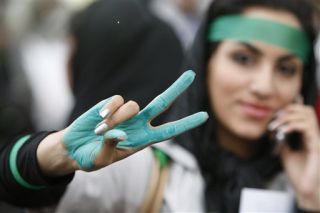 The situation in Iran is frightening and is still unfolding rather quickly. (For anyone using us as their sole news source, the results of the recent election in Iran are being questioned by a large number of citizens, and the stability of the current Iranian government is in some question.)

Before, if someone noted that, our instincts probably would have been to turn on the TV to one of the news channels just like what some of us did on that one horrible day in 2001. But today, there’s not much of a reason to bother turning on the idiot box–just opening your Web browser can tell you everything you need to know faster. And that has made for a lot of interesting discussions on the net, such as:

Twittering Dissent Around the World. Ashton Kutcher, of all people, proved that he is more interesting to people than CNN is, as he got to one million Twitter followers before CNN did. Twitter is proving to be the most important source for breaking news, and that has the current regime running scared, to the point where they are posting bogus info to try to throw water on the situation. (They’re also trying to track down some of the real posters, and if any are found, expect bad things to happen to them.) Twitter is keenly aware of their unique position, and they even cancelled a planned downtime to keep news flowing, apparently at the request of the US State Department.

Iran: A New Media Watershed Moment? While CNN made it big and earned a lot of credibility during the first Persian Gulf war, it may well be that they have had the torch they were carrying yanked from them by regular people using social networks. (The author of this post notes that this uprising could be the thing that seals the fate of a lot of news organizations.) Then again, Twitter and similar services are giving readers access to events unfolding in real time, something print can’t handle and something broadcast media can’t really do right now since there’s little video coming out of Iran. So on the cable news outlets, there’s a little bit of info about what’s going on during top-of-the-hour updates, and that’s about it.

Iran Cuts Off Foreign Press. Another reason why the press as we know it is likely in big trouble–while Iran can yank a foreign journalist’s visa, it’s considerably harder for them to track down their own citizens who are reporting live via social networks.

The best aggregate coverage of the uprising appears to be provided by The Huffington Post and by The Atlantic. There are a smattering of YouTube videos, but there’s not much.