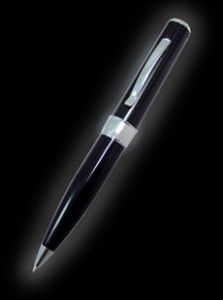 As more video comes to light from the struggle inside Iran, one must marvel at the technology making this all possible. Even a decade ago, people had to reply mostly on images smuggled out of an area of conflict by journalists working for the traditional media. Now, with all the quick down-n-dirty ways of getting images on the airwaves, anyone who can get footage to the right sources can get their footage seen by the world.

A story from FOX News is an example of ways some people within Iran have gotten some of the graphic images to the press: by a James Bond-like spy camera embedded in what looks like an ordinary writing pen.

Unlike tiny spy cameras of days gone by, this one records to a flash drive and can be exported through a common USB port. FOX News reports that thousands of these pens were sent to the citizens inside Iran to get these images. Once the Iranian government found out about the pens, they began to confiscate them, and new unknown devices have since replaced the pen-cams.

Spy cams have been around for decades, sometimes called “Lipstick Cams” or “Baby Monitors” these cameras were very tiny and hidden in ordinary things like a lipstick tube, a teddy bear’s eyes, or sunglasses. They usually sent video via a cable to a recording device hidden inside a purse or other place. These newer memory card cameras need no such tether, which is what makes them pretty portable and hard to detect. Anyone can use them, and record about 20-minutes of footage.

These people are putting their lives on the line to get these images out to the world. In the past, a government could control it’s own media, and make attempts to keep outsiders from getting in, but between cell phones and extremely small spy cameras like these, capturing extraordinary events are left in the hands of ordinary people.

According to a FOX News interview with this Australian journalist, many of the foreign press has already left Iran due to the dangers involved, and now the story has been left to those left behind to be covered by the citizens.

Here’s a YouTube video we found on how to make your own spy cam.