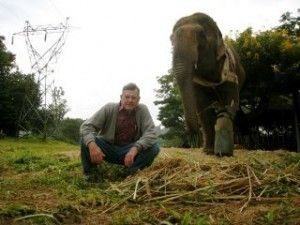 Two years ago, Donald Tayloe came to a Videomaker workshop to learn some producing skills because he wanted to make a documentary about a subject he felt passionate about: the vanishing Asian elephants. A lofty goal, and one might think out of reach, but Tayloe persevered, learning what he needed to tell his story, and we just received an early release of his DVD: the last elephants in thailand.[image:blog_post:13860]

This DVD is well produced, and follows the trials of two Thai elephants, showing the sad truth of abuse of these magnificent animals and telling the story of hope through the voice of elephant rescuers.

The internet recently has been inundated with video showing elephants painting lovely images of flowers, and Oprah herself even had a special issue all about the painting elephants featured in her magazine “O“. However what you don’t see in the online video is how the elephants are abused, coerced, and stabbed to create these paintings.

Produced by Tayloe along with shooting and editing assistance from Michelle Mizner and Anthony Rutanashodech, the video tells the story of how the citizens of Thailand are trying to help these creatures, while it’s government turns a blind eye for the sake of the tourist dollar.

[image:blog_post:13861]the last elephants in thailand is a wonderful example of how video can make a difference by enlightening others to a particular predicament and is a testimony of how one person can follow his dreams and tell his story to the world.

Video has the power to move people into action, and is an incredibly powerful tool in the hands of a skilled story-teller using good production techniques. We applaud Tayloe’s diligence in following his dream and encourage all video producers to check out his trailer and website, HAE Pictures , and think about what YOUR passion is, and go out and tell that story!