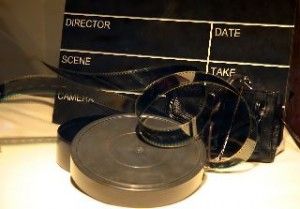 I’m a Behind the Scenes freak and a Movie Science geek. Anything that explains how movies are made, from the magic of Hollywood to the innovations of the garage-effects producer, I’ll watch.

I’ve been laid up for the past two days recovering from dental surgery and I pulled out a bunch of my favorite movies that have extensive behind-the-scenes (BTS) footage and How It’s Made stories. My favorites are when the directors’ commentaries explain the ingenious tricks they used that help make the movie production possible. [image:blog_post:13876]

For instance, I was watching an anniversary DVD release of the classic “Casablanca“, and learned a fun tidbit about the famous ending of the movie on the BTS back-story. The huge airplane that sits waiting for Ilsa and Victor ( Ingrid Bergman and Paul Henreid) to board, while Rick and Captain Renault (Humphrey Bogart and Claude Rains) watch, is actually a scaled-down model, and the men acting as aviation mechanics working around the plane are midgets, to give the perspective of the plane being so large.[image:blog_post:13877]

I recently discovered this post on ProVideo Coalition that introduced me to a new series on BTS and the making of movies. Science Discovery is airing a series called “Science of the Movies” that takes viewers behind the lens and into the magical world of making movies through scientific discovery. Tagged as “geekfastic” the show’s promoters write: “Appealing to the movie junkie in us all, the new series explores the remarkable – yet rarely celebrated – scientific world that exists behind the screen, spotlighting the visionary artists, entrepreneurial spirit, innovative technology and remarkable techniques responsible for creating unforgettable, edge-of-your-seat moments in blockbuster films.”

From what I hear, it’s a bit too glitzy and over-full of effects for BTS geeks like me, we just want to see how it’s made, and don’t need the splash. I hope the show makes it through it’s infancy, it would be a great armchair learning tool for all movie and video producers out there.