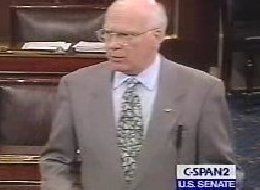 So, with the upcoming retirement of Supreme Court Justice David Souter, President Obama must nominate a new justice to be confirmed by the Senate. The cat’s now out of the bag: it’s Judge Sonia Sotomayor, Circuit Judge of the United States Court of Appeals for the 2nd Circuit. She has been a target of criticism for a long time, and this is another time where the Internet’s deep memory has remembered something quite interesting: a 10+ year old clip of Senator Patrick Leahy (D-VT) taking the opposition to task for their position.