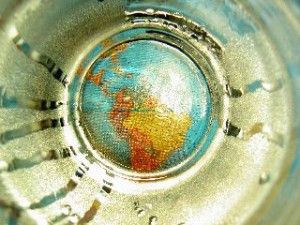 Back in 1970, when the sandal-wearing free-spirit hippie types first started this grass-roots celebration, I think people sort of laughed about it, but the era was a turbulent one with wars in the East, gas prices out of control, and rolling blackouts across the country.

Many people forgot about the conservation effort during the decadent 80s and 90s, and here we are again facing the same issues. Was it Santa Ana who said something like if we don't learn from our mistakes we're destined to repeat them?

Back in 1970, to commemorate the first Earth Day, my old high school graduating class proudly labored in the hot sun for a week turning a slab of dry dead turf into a cool eco-garden complete with algae, frogs, and various living organisms. When I went back for my 20-year reunion, that eco-garden had been cemented over. A testimony to the 1990s. And look at us now … little did we know in the 1970s how much we would depend on our electronics to get by every day in this new century, and much they would hurt Mother Earth.

Today, we've become quite aware of energy conservation again and how much energy we waste. But we video producers understand this as we are a power hungry sort… we are always pulling power from some source for our myriad gadgets, machines, and devices. In honor of the upcoming Earth Day, here are a few tips to help save and conserve sent to us from Greg Spector and Retrevo:

1. Turn off devices when you're not using them, especially game consoles and TVs. Large plasma TVs are the biggest hogs but game machines are a close second. Shutting down game players in the U.S. for just 24 hours would save enough energy to power the city of San Diego for a day.

4. Unplug the gadgets you only use occasionally. If you only use them once in a while, fax machines or peripherals attached to your computer such as USB hard drives for backup, unplugging guarantees they're off.

5. Use renewable energy to recharge small devices like iPods, cell phones and GPS. Inexpensive devices like the Hymini wind turbine, Solio's Hybrid 1000, Freeplay Freecharge, or Kinesis Industries combo are easy to use and get your gadgets going in minutes.

There are a lot more tips in, Retrevos Twenty Two Tips for Greener Living with Gadgets which can be found here.