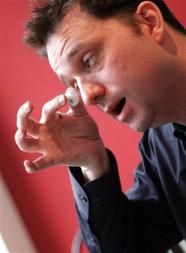 A Canadian filmmaker is on his way to realizing an age-long dream of becoming like The Six Million Dollar Man from his childhood TV shows. Blinded in one eye from an accident when Rob Spence was a boy; he had the damaged eye removed a few years ago so he could wear a prosthetic eye, which looks like a normal eye. He noticed that the tiny camera in his cellphone could probably fit into the prosthesis, and thought, "why not?"

Scientists agree with Spencer, and have been looking into ways to not only implant a tiny camera that can record video, but to someday have the ability to be wired to a blind person's brain enabling them with sight.

We first told youabout Rob Spence and this new device back in December, and now the final tests on implanting Rob Spence's empty eye-socket with a tiny camera will proceed within about a month.

Being a filmmaker, Rob wants to see how close to "true" reality he can come by just recording ordinary day-to-day conversations and events without his subject's being turned off by a regular camera. However, since he's a real filmmaker, Spence would expect to be on the up-and-up, and not try any weird stuff that could be considered morally, ethically, or legally out of the circle of decency.

[image:blog_post:13941]Who wouldn't dream of having Steve Austin's Bionic Man-like limbs and accessories, we read all the time about the new running prosthetics that enable amputees to not only walk and run, but to run father, faster and better than able-footed people. Some, in fact, have been barred from running in certain races due to their extra abilities.

Spence's hope is to show an Orwellian reality to life as it is today: George Orwell's book, 1984, was written more than half-a-century ago, and the reality of Orwells' prediction was off by two decades, but by 2004, it was obvious Big Brother IS watching; everywhere.[image:blog_post:13942]

From security cameras at the bank and coffee shop to traffic cameras hanging over intersections, and now cell phones (and soon to be Eye Cams) with tiny cameras are everywhere, no movie or music celebrity can get away with trashing a lowly service worker in a restaurant, no CEO can get away with making an off-color joke in the boardroom, and no politician can get away with trying to pick up booty in a public bathroom.

Big Brother is everywhere, it's up to filmmakers like us, and Rob Spence, to try to keep video and filmmaking integrity high instead of going for the easy childish 12-year-old "Upskirt" mentality. Read more about Spence's latest, plus more photos and video below.