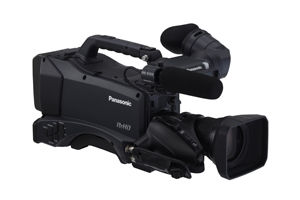 At a pre-NAB press junket in New York, our press associate, Paul Pierog, got to sit down with a few folks from Panasonic and look over some gear that Panasonic will be showing off in Las Vegas at the annual National Association of Broadcasters convention in April. Among the toys were a P2 Rapid Writer transfer tool for P2 workflow and some HD broadcast monitors, along with this AG-HPX300 P2 camcorder.

The 10-bit 4:2:2 camera has a 17x HD Fujinon lens and such features as waveform and vectorscope, hot-swapping of the two cards, and the output can be set for down conversion or cross-conversion with letterbox, 4:3 crop or squeeze.

[image:blog_post:13951]If you can’t convince your partner, spouse, or bank to pop for the 10-grand, check out the AG-HPx300’s little brother, the Panasonic AG-HPX170, which will only set you back $5695. To find out more about the 170, here’s a sneak peak at the review in the upcoming May issue of Videomaker magazine. To find out more about the 300, read this press release below.

The HPX300 establishes a new benchmark for performance within this price range, said Robert Harris, Vice President, Panasonic Broadcast. It not only captures full native 1920 x 1080 HD resolution, but it allows professionals to record at a quality level that no other camcorder in this price range can equal. Without the compromise of 8-bit, long GOP, 4:2:0 recording, the HPX300 provides master-quality, 10-bit, 4:2:2 individual frame capture using our award winning AVC-Intra codec. Video professionals will immediately realize that this camera is in a field of its own.

The HPX300s interchangeable lens design gives video pros the flexibility to utilize a wide range of broadcast and production HD lenses. The camera is equipped with numerous popular features including Chromatic Aberration Compensation (CAC) to maximize lens performance, built-in scan reverse for use with film lenses, a Dynamic Range Stretch (DRS) function to help compensate for wide variations in lighting, a waveform and vector scope display, and two focus assist functions a picture expanding function and a focus bar.

For added creative flexibility, the HPX300 also has variable frame rate functions for creating fast and slow motion effects. In 720p mode, a user can choose between 20 variable frame steps between 12p and 60p. Because the HPX300 records images at the frame rate set in the camera, users can preview the speed effect right on the spot, without using a frame rate converter. When working with the cameras advanced 1080/480 24pA mode, users have the option of using 2:3:3:2 pull down, which allows most nonlinear editing systems to easily extract 24 frames on ingest.

Equipped with two P2 card slots and new 64GB P2 cards, the HPX300 offers recording capacity that exceeds that of tape based camcorders. The HPX300 offers all the benefits of a faster, file-based P2 HD workflow including such recording features as instant recording startup, clip thumbnail view for immediate access to video content on all cards, and a host of time-saving recording modes including continuous recording, card slot selection, hot swapping, loop, pre-record (three seconds in HD and seven seconds in SD), one-shot and interval recording. The camera also features an SD memory card slot for saving or loading scene files and user settings, or proxy data (optional AJ-YAX800G Proxy board required).

The HPX300 has advanced gamma functions offering six shooting scenarios, including the popular Cine-Like Gamma modes found on Panasonics popular VariCam, which gives recordings the characteristic warm tone of film recordings. A scene file dial on the side of the camera provides quick access to six pre-loaded settings; the dial can also be programmed with user-defined settings.

The HPX300 can also be used as a studio camera. It is equipped with a remote control terminal (RCU) for use with the optional AJ-RC10G Remote Control Unit and compatible studio remote control systems. Later this year, Panasonic will release a customized studio configuration system for the HPX300, which will include the AG-BS300 base station, AG-EC4 extension control unit (ECU) and AG-CA300 remote control camera adapter.

At eight pounds, the HPX300s lightweight, well-balanced design and ergonomic handle makes it comfortable to use. All operation switches, volume controls and card slots are on the left side for easier operation. The HPX300 is equipped with a widescreen 1,226,000-dot LCOS color viewfinder and a widescreen 921,000-dot 3.2-inch LCD color monitor. Its power consumption is low at only 18 watts.

P2 HD all solid-state products offer high definition recording without the mechanical wear and environmental limitations of tape, hard disk, and optical disc based systems. P2 HD ensures the highest reliability, especially in challenging conditions of extreme temperature range, shock, and vibration. P2 HD products provide a significant reduction in maintenance costs, longer useful product life, and immediate access to recorded video (no need to digitize, ingest or create proxy video files) and metadata. P2 HD provides the reliability of solid-state production; the immediate connectivity to existing IT infrastructures; the speed, ease of use and portability of P2 cards; and the interoperability with leading NLE systems.