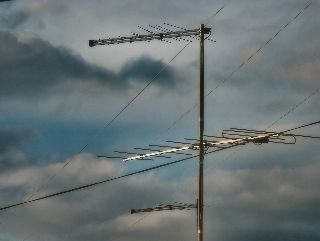 A recent Nielsen rating report of a few days ago found that only 3.9-percent of US households are still not ready for the digital transmission change over that is now scheduled for June 12th.

All TV stations were supposed to be ready by last February 17th, but the feds canceled that date in an 11th hour decision, due to their concern that the people that didn’t have their free government-issued receivers set up would be without broadcast television.

Oh, my goodness, how horrible!

[image:blog_post:13946]Are we such a mindless collection of TV-controlled sheep that we can’t get along without TV so badly that the government is actually concerned for our TV-driven lifestyle? When did TV become so important that we can’t live without it? I’d love to see the government give the same concern for such important issues as health care insurance, extremely high rates of unemployment and home foreclosures.

According to this Nielsen poll, the largest number of Americans that weren’t prepared for the DTV changeover wasn’t the “at risk” 55+ year-old TV owners as the government expected, rather it was the 30-something procrastinators waiting for… what..? Circuit City “Going Out of Business” bargains? The US commerce department spent almost a billion and a half dollars delivering coupons to people who requested their free set-top boxes that convert digital signals to analog.

If 5-percent of the people still don’t wish to comply, who cares? I think it’s asinine that the TV stations across the country have to hold their programming for these people who, perhaps, have better things to do than watch TV, which is probably why they haven’t gotten their set-top converter yet.

Read the news story from the Radio and TV Business Report here:

The Nielsen Company measurements have revealed a steady chipping away at the number of households completely unready for the DTV transition, and as of March 1 only 3.9% of US households are at risk for complete loss of service. The unprepared comprised 6.8% of total TV households back in December 2008. The ethnic breakdown is as follows: White 3.2%, Asian 4.5%, Hispanic 6.5%; African-American 6.7%. The 55-and-older demo, often considered especially at risk, is pretty much ready to go, except for a relatively scant 2.2%; its the 35-and-unders who are procrastinating, with a 7.2% level of unpreparedness.

RBR/TVBR observation: The key will be to continue chipping away at these numbers between now and June. Regulators and other stakeholders demonstrated they are well aware of this at yesterdays FCC panel. We expect to see a strong effort to make 6/12/09 as stress-free as possible.

And a small clipping from TV Week here:

Last year, the U.S. Commerce Department launched a program to give unprepared households $40 coupons that could be applied toward set-top boxes that convert digital signals to analog; it has spent almost $1.5 billion sending out 49 million coupons. Still, Congress on Feb. 4 bumped back the switchover date to June 12 to accommodate both the millions of households that would have lost programming and the TV stations that didnt have the required equipment for the switchover.

Albuquerque-Santa Fe, N.M., is the least-prepared U.S. metropolitan area for the switchover, with 10% of those households losing all programming with all-digital broadcasts, Nielsen said today.