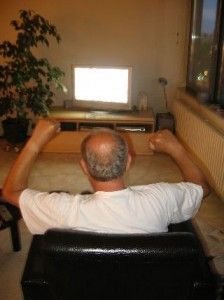 Do you think you’re spending too much time staring at a video screen?

According to a Nielsen study, the average person spends 8 hours a day looking at screens, whether on a TV, computer, mobile device or even an advertising screen in a grocery store checkout line.

The poll, reports an article in the New York Times, was the largest most intense survey undertaken by the TV monitoring service. Instead of relying on people’s memories of what they did, pollsters followed them around for several days, making note of when and how they looked at the myriad of screens all around their world.
The New York Times article writes, “The researchers found that television and video games attract the most undivided attention, while other actions (like listening to music) often occur while people are doing other things.” which shows that people really do prefer to lay back and relax when watching video, and that we are in the right business at the right time to capitalize on that viewer market.