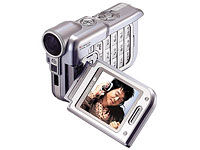 There is something that has been on my mind as of late that I just wanted to create a little dialog about. Even though I work with new technologies and get to see the latest and greatest quite a bit… The truth is, I'm not much of a techie! As a matter of fact I tend to avoid the subject altogether. Now I admit that I have gotten a little comfortable in my old school cheap, yet effective attitude toward new technologies. Which basically stands as, "Newer isn't better… It's actually more of a burden." For years now, I have wondered about the future of cinematography and where we might end up. What equipment will be the most predominantly used? Will humans still be needed? Will big ugly cameras still be a necessity? In my own personal opinion, I think that the future will come down to cell phones. Nokia has already designed numerous models that feature high quality video capture and I'm still stunned by Pantech's PH-L4000V camcorder phone. Samsung's SCH-V410 can capture up to 2 hours of video. Or for that matter, will the technologies all begin to merge together… Camcorders will be able to accept phone calls? MP3 players that capture video? Cars that can fly? We can only speculate, but what do you guys think? Where are we heading?