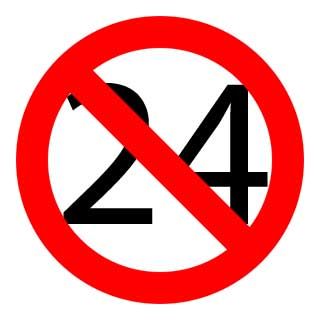 VHS, NTSC, and 8mm film are all technologies that I’ve been happy to see the back end of. They’ve been surpassed by newer technologies that have vastly improved motion picture image reproduction. No one is pining for the days of VHS anymore, or artificially degrading their pictures down to 240 lines of resolution to achieve that VHS look.

There is however one ancient technology that is still seriously impairing the quality of video these days and that is 24p. Frankly 24p deserves to die and be buried in the obsolete format graveyard where it belongs.

The problem with 24p, isn’t the “p” part. Everyone agrees that all things being equal, a progressive scan gives you better resolution and detail than an interlaced image. (Interlaced video is also one of those ancient video relics that deserves to be beaten to death, and I’ll be the first one in with a baseball bat.) There’s just no reason for interlaced video anymore in a world of flat panel displays.

No the problem with 24p is the 24 part. 24 frames per second is just to slow and juddery for good motion reproduction. We need to collectively make the jump to 60p and do it now.

Now before a thousand people yell at me on the internet, keep in mind, I know all about the film look, and how making video look more like film is the holy grail for some people. I have shot 35mm, I’ve cut major features on 35mm. I hate 24p all the more.

24 frames per second was chosen originally because film is expensive, and that is the absolute lowest frame rate possible to use and still have some semblance of fluid motion to the eye. The less frames per second (fps), the less film you used, and the more money you save. There are set limitations on how fast you can pan or tilt at 24fps to make sure you don’t break the illusion of movement. We need to stop thinking of this as an aesthetic. We need to realize that 24p is more rightly considered a technical limitation that we long ago had no need to adhere to.

But isn’t 24p a critical part of that elusive, magical, all-powerful film look that everyone is looking for? Well let’s get one thing clear: when we say film look, what we’re really talking about is a film transferred to video with a nice telecine look. Not film shot out of a projector and reflected back off a large white screen in a dark room look.

When talking about a film transfer look, we’re trying to get all the best attributes of film, the tonal range, the resolution, into a largely inferior video signal. However the one area where video has an advantage over film is frame rate. Yet we artificially want to handicap ourselves to the limitations of 24 fps film, even when we have the ability to shoot 60fps on video. If you really want the film look why not add projector registration errors into your video (the image slightly moving up and down as film passes through the gate)? Why not add artificial grain to your video? Embracing 24p for video is embracing the worst parts of film. It makes no sense to bring the worst parts of the film look to video when there are better options available.

Defenders of 24p will argue that the 24p frame rate is more cinematic, in that major feature films are shot at 24fps, and that associating your look with high budget features makes your video feel more high end. Their counter argument is that 60p looks too real and too much like video. But the argument that looking too real as a detriment is absurd when you realize that the entire flow of technological advancement in filmmaking is to better represent the real. I’m sure there were people that thought these new fangled camera motors were too real, and that the hand-cranked look was more cinematic. That this crazy idea of sound in a motion picture was too real, and that silence was more cinematic, and of course color, who would want color when black and white was more cinematic.? The point is, what is cinematic has never been a constant and is always moving towards a more real representation and not away from it.

Regardless of our feelings and what looks like a film, I think everyone agrees that objectively, 60p handles motion much better, and has more temporal resolution than 24p. And from that fact, the rest just follows. What we should be striving for is a video image that has the tonal range of film, the resolution of film, and the frame rate of video.

Currently out of the common ATSC HD formats 720p60 is by far the best looking. When 1080p60 becomes available it will be better still. We, as video producers, need to simply open our eyes, turn back from nostalgia and perceived quality just let 24p die.