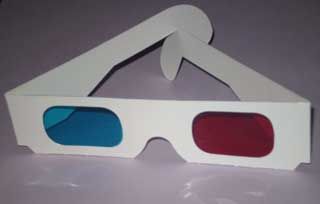 From the standards body that brought you such hits as NTSC, ATSC, and drop frame time code… The Society of Motion Picture and Television Engineers (SMPTE) has announced that they’re starting work on a series of video standards for viewing 3D content in the home.

There will be a few high profile 3D films coming out to the theaters this year, and the technology has advanced significantly from the 50’s blue and red glasses variety. Those of us lucky enough to attend NAB in 2007, were treated to an astounding 3D video demo of an NBA basketball game in the Sony booth. The technology still requires special polarized glasses, but the results were very impressive.

So for those of you who were wondering what’s coming after HD? Looks like it’s 3D. Soon we won’t be asking how many chips your camcorder has, but how many lenses. We’ll worry less about depth of field and more about convergence. I suggest SMPTE should call the new acronym 3TSC.

From a SMPTE Press Release:

The Society of Motion Picture and Television Engineers (SMPTE) is establishing a task force to define the parameters of a stereoscopic 3-D mastering standard for content viewed in the home. Called 3-D Home Display Formats Task Force, the project promises to propel the 3-D home entertainment industry forward by setting the stage for a standard that will enable 3-D feature films and other programming to be played on all fixed devices in the home, no matter the delivery channel. The inaugural meeting of the Task Force is open to entertainment technology professionals interested in participating in the effort, subject to available space (SMPTE membership not required). It takes place on August 19, 2008 and will be hosted by the Entertainment Technology Center (ETC) at the University of Southern California, near downtown Los Angeles.

“Digital technologies have not only paved the way for high quality 3-D in the theaters, they have also opened the door to 3-D in the home,” explained SMPTE Engineering Vice President Wendy Aylsworth. “In order to take advantage of this new opportunity, we need to guarantee consumers that they will be able to view the 3-D content they purchase and provide them with 3-D home solutions for all pocketbooks.”

The 3-D Home Display Formats Task Force will explore the standards that need to be set for 3-D content distributed via broadcast, cable, satellite, packaged media and the Internet and played-out on televisions, computer screens and other tethered displays. After six months, the committee will produce a report that defines the issues and challenges, minimum standards, evaluation criteria and more, which will serve as a working document for SMPTE 3-D standards efforts to follow.

The first 3-D Home Display Formats Task Force gathering will feature demonstrations of 3-D technologies. All technology professionals in content creation and distribution, consumer electronics and entertainment tools and services who are considering joining the group are welcome to attend. Non-members will be asked to pay a small fee for the meeting, and ongoing participation in the work requires membership in the SMPTE Standards Community. Register at: www.smpte.org.