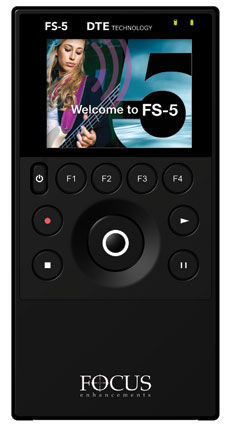 Focus Enhancements today announced their new DTE recorder, the FS-5. Essentially it's a 100 gigabyte portable harddrive recorder that connects to your DV or HDV camcorder via Firewire. When you press the record button on your camcorder, the video goes to tape, but it's also captured to the hard drive as well. This allows you to connect the DTE directly to your computer for editing (DTE actually stands for Direct to Edit) instantly, and have a tape back-up archive as well. So you get the best of both worlds, the longevity and security of tape, with the instant access capabilities of a hard drive camcorder. The most novel feature of the FS-5 release is the ability to use a wireless device, such as a laptop or PDA, to add metadata to the video clip as it's being recorded. For example while the camera man is shooting, the director could mark each take good/no good, quick comments on an interview, or location and wardrobe notes. This metadata is saved with the individual video files, and is available when their imported back into the computer. From a Focus Enhancements Press Release: Focus Enhancements Announces Availability of Fifth Generation DTE Recorder New FS-5 Direct To Edit Recorder introduces groundbreaking wireless metadata technology Campbell, Calif. July 1, 2008 — Focus Enhancements Inc (NASDAQ: FCSE), a worldwide leader in media management and ultra wideband (UWB) wireless technology, today announced the general availability of the FS-5 Direct To Edit (DTE) recorder, the fifth generation in the companys award-winning line of DTE recorders. First announced at NAB 2008, the ultra-portable FS-5 introduces the groundbreaking ability to wirelessly log custom metadata in the field while shooting enabling a new real-time metadata-based workflow for broadcast and video professionals and ensuring the seamless continuity of metadata through all phases of production and post-production for easier identification and management of media. With a wireless (or wired) mobile device or laptop, users can access the FS-5 via a web browser, define metadata, and assign it to the video while recording. As a result, clips are labeled, categorized, and organized as soon as the shoot is over eliminating the need to tag footage at a later time. Additionally, Focus Enhancements Universal Metadata Engine (UME) ensures that metadata is compatible with Final Cut Pro and the ProxSys Media Asset Management product line. Since its launch at NAB, the FS-5 and our new metadata-based workflow have generated tremendous interest among video and media professionals, said Matt McEwen, Director of Product Alliances for Focus Enhancements. Our Direct To Edit technology helped spark the tapeless revolution in broadcast and other video production markets. And now, the ability to wirelessly log metadata brings a new level of efficiency to the tapeless end-to-end workflow. Weve relied on Focus Enhancements DTE recorders for many years and have been eagerly anticipating the new advancements introduced in the FS-5, said Brian Critchlow, partner and CTO of Digital Media Factory. During our beta deployments, weve been impressed by the ease of use of the FS-5s wireless metadata functionality. This key innovation will save us significant time and improve the way we manage our media assets in post-production. In addition, the FS-5's Universal Disk Format (UDF) file format support further increases our productivity when dealing with multiple clips in Final Cut. Along with its unprecedented metadata capabilities, the FS-5 features the following key enhancements: — Increased Direct To Edit file format support with the addition of MXF HDV 720p30 and 1080i 50/60 to give Avid editors the ability to work natively with HDV files using the Avid Media Tool — 25% weight reduction and a 60% reduction in size when compared to the entry level FS-4 model — 1.8 internal disk drive which features a very rugged, ultra-portable, and shock resistant design — Fanless design for very quiet operations — Support for UDF to enable recording up to 1.5 hours in a single DV/HDV file — Newly designed user interface with new scroll wheel and color LCD — USB 2.0 computer interface to provide flexible file transfers to the computer The FS-5 100 GB model is priced at $2,195 MSRP US and is immediately available through Focus Enhancements worldwide dealer and distributor network. FS-5 customers will receive a free camera mount with their order. For more information, please visit www.focusinfo.com.