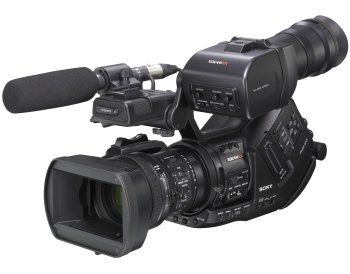 Sony announced it’s second EX XDCAM camcorder at NAB this year, the PME-EX3 high definition camcorder with an interchangeable lens system. The PME-EX3 basically has the same guts as the EX1, keeping the functionality and improving the flexibility with the option of different lenses.

The universal first impression of the Sony PME-EX3 camcorder at Sunday’s press event was that it looked awfully similar to Canon’s XL line. Sony’s explanation is that the PME-EX3 design features a semi-shoulder mount (as does the Canon XL line), which gives the EX3 a similar look, much like all full shoulder mount camcorders look similar in design as well. The goal of the semi-shoulder mount is to allow shooters the ability to shoot handheld or off-the-shoulder. In our experience with semi-shoulder camcorders this additional functionality is a plus, but one should expect to do mostly off-the-shoulder with these hefty camcorders.

Sony also announced their prototype 32 GB SxS memory card compatible with the EX1 and EX3 camcorders. Solid state recording keeps trending upwards and Sony is keeping pace with larger capacity memory cards. The PME-EX3 records up to 35 Mbps, MPEG 2 long GOP video to the solid state cards. In addition to the Sony PME-EX3 camcorder, Sony has a growing line-up of XDCAM camcorders that continue to use the same long GOP compression. Sony is relying on its development of this technology to make acquisition, editing and transmission of MPEG 2 long GOP video as seamless as possible.

The Sony PME-EX3 camcorder will be available in the Fall for $13,000 MSRP.