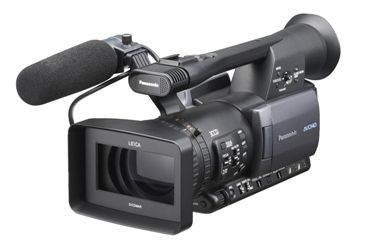 Panasonic has announced a successor model to it’s extremely popular DVX-100. The new model called the AG-HMC150, is a 3 CCD, HD camcorder that records in the AVCHD format to SD cards. It has several 1080 and 720 frame rates, XLR inputs, a Leica Dicomar zoom lens, and a handheld form factor. No pricing information was available, and unfortunately the camcorder won’t be available till Fall of 2008. Read the press release below:

SECAUCUS, NJ (February 13, 2008) Panasonic announces a new addition to its growing professional AVCHD product line that capitalizes on the phenomenal success of its popular DV-based AG-DVX100. The new, affordable AG-HMC150 handheld is scheduled for shipment later this year.

The HMC150 is designed to provide enhanced HD production capabilities for video enthusiasts who desire professional features, extended recording capability and the fast, simple and highly reliable workflow offered by tapeless, solid-state recording. The HMC150 features three native 16:9 progressive 1/3 CCD imagers with an optical image stabilization (O.I.S.) function to ensure stable shooting and a 28mm Leica Dicomar wide-angle zoom lens (35MM equivalent). The HMC150 handheld offers 1080i and 720p recording at 13Mbps, comparable to current HDV compression formats with bit rates of 25Mbps. In addition, an enhanced mode with a higher bit rate is planned to be incorporated into the HMC150 for higher-level use. It supports a full range of HD formats including 1080/60i, 1080/50i, 1080/30p, 1080/25p, 1080/24p native; 720/60p, 720/50p, 720/30p, 720/25p, 720/24p native; and it is 50Hz/59.94Hz switchable.

The HMC150 offers professional HD performance with the simplicity of a digital still camera. Since the solid-state handheld records onto SD and SDHC memory cards, professionals can benefit from the reliability and random access of tapeless recording and capitalize on the cost advantages, widespread availability, and growing capacity of standard SD consumer cards. Using the newly announced 32GB SDHC memory card and the camcorders 6Mbps recording mode, users can acquire up to 12 hours of HD video and audio on a single SD card.

Additional features of the HMC150 include professional XLR audio input connections and a wide range of data and signal interfaces including HDMI out, USB2.0, component out (D terminal), composite out and RCA audio out jacks, a 3.5-inch LCD monitor to display thumbnail images for quick viewing and playback, and a Time Code/User Bits menu. The camera also has remote jacks for focus iris and start/stop functions, a pre-record feature that allows the camera to capture footage occurring immediately before real-time recording begins, and a time/date stamp menu option for documentation purposes.

Panasonics AVCHD camera line brings the benefits of solid-state recording to budget-conscious professionals. Like digital still photography, recording onto SD/SDHC card offers a fast and simple IT-compatible workflow with ultra-reliable performance and resistance to shock, vibration and extreme temperatures and weather. SD and SDHC memory cards are inexpensive and widely available and can be reused repeatedly. Since AVCHD records video as digital data files, content can be transferred and stored on affordable, high-capacity hard disk drives (HDD) and optical storage media and transferred to future storage media as technology advances.

The HMC150 will be available this fall at a price to be announced.