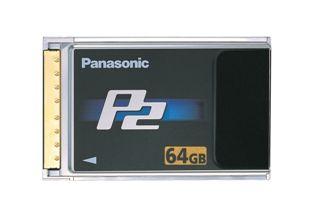 Panasonic announced today the forthcoming 64GB P2 card. It allows over an hour of DVCPRO HD video, for P2 camcorders like the HVX-200. Availability in the fall, price unannounced. Read the press release below:

SECAUCUS, NJ (February 13, 2008) Panasonic has announced a 64GB P2 solid-state memory card for its popular line of P2 HD and P2 solid-state camcorders and decks. With the arrival of the 64GB card in the fall, Panasonic will again have doubled the storage capacity of its P2 card from the current 32GB capacity, providing HD recording time dramatically greater than any tape or disc-based system.

With these incredible recording times, the 64GB P2 card will minimize or eliminate the need for video professionals to switch out media on-set while working on long-form projects, said Robert Harris, Vice President of Marketing, Panasonic Broadcast. The P2 strategy, first introduced in 2004, called for P2 cards to double in capacity every year. With the introduction of a 64GB P2 card later this year, Panasonic is on track to fulfill this promise.

P2 cards are designed for professional users to offer fast, easy IT-based operations and ultra high reliability. They are reusable so that P2 acquisition requires no media consumption, resulting in tremendous savings in media costs.

A P2 card is comprised of its own processor, firmware, a RAID controller, and gigabytes of the highest-quality nonvolatile solid-state memory chips. They manage data intelligently including a write-verification step for every byte of memory that is written to the card for fault-free operation. The P2 card can be connected instantly with laptop PCs and major non-linear editing systems. Packaged in a rugged, die-cast frame, the P2 card is resistant to impact, vibration, shock, dust and environmental extremes including temperature changes.

The 64GB P2 card will work immediately with all P2 HD camcorders purchased from May 2007 forward. P2 and P2 HD products purchased prior to that date will need a free, downloadable software upgrade available on the Panasonic website. Customers wanting to connect the card to an ExpressCard slot of a laptop can utilize a low cost PC card-to-ExpressCard adapter.