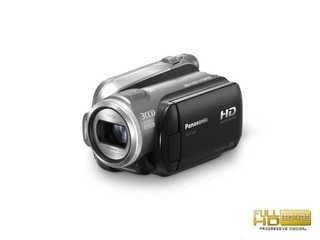 Las Vegas, NV (January 6, 2008) Panasonic, a leader in High Definition and digital video technologies, today announces two new full-High Definition 3CCD camcorders, the HDC-HS9, a hybrid model that can record to either an SD (or SDHC) Memory Card or its built-in 60-GB hard disk and the HDC-SD9, the worlds smallest and lightest* SD card High Definition camcorder, weighing in at just 0.606 pounds. Both the SD9 and HS9, which feature new Panasonic camcorder technologies, Face Detection and Intelligent Shooting Guide, will be displayed at the 2008 International CES in Las Vegas from January 7-10 at the Panasonic booth #9405.

[image:blog_post:14217]
The Panasonic HDC-SD9 and HDC-HS9 offer full-High Definition**, 1920 x 1080 progressive recording (24 frames per second)*** and use the AVCHD video format. In addition, the new models feature Panasonics original 3CCD system, Advanced MEGA O.I.S. (Optical Image Stabilizer), and a Leica Dicomar lens three components that also contribute to the high-quality video output. Advanced MEGA O.I.S. checks and compensates for hand-shake around 4,000 times per second, about eight times more effectively than Panasonics previous systems. In a 3CCD camera system, the light received through the lens is split into its three primary color components red, green and blue and a signal from each is processed by one of the three CCDs to provide rich and detailed video images.

Consumers will be amazed by the richness and clarity of the video taken with one of these new High Definition camcorders, as this is quality they are accustomed to getting when they go to the movies, Alex Fried, National Marketing Manager, Imaging, Panasonic Consumer Electronics Company. Panasonic is bringing the benefits of High Definition right into the living room, so anyone can enjoy high-quality videos in the comforts of their home. And with new features such as Face Detection and Intelligent Shooting Guide, these new intuitive technologies help consumers easily produce video content they would be proud to view in High Definition.

The SD9 and HS9 are the worlds first**** camcorders to feature Face Detection for use in recording moving images. Face Detection automatically locates any faces in the picture and adjusts the exposure, contrast and skin tone to achieve optimal results. Thus, even when the faces are backlit or the lighting is low, faces are clear and not lost in the shadows.

The HDC-SD9 records on both SD and SDHC Memory Cards, and is even more compact than its predecessor, the HDC-SD5 model. After recording with an SD9, the SD Memory Card can be inserted into the SD card slot on certain Panasonic PZ Series VIERA HDTVs for easy, instant playback of High Definition video. Moreover, both the SD9 and HS9 are compatible with Panasonic’s VIERA Link and can connect either to a VIERA HDTV via an HDMI cable, or the user can operate the camcorder using the TV remote control and following on-screen prompts.

The HS9 is a hybrid model and can record full-High Definition images onto either an SD (or SDHC) Memory Card or to its built-in 60-GB hard disk. A 16-GB SDHC Memory Card*** can hold approximately six hours of video, and the 60-GB hard disk can hold around 23 hours (both in HE mode). This gives the HS9 a total capacity of approximately 29 hours of full-HD recording. In addition, the HS9 can copy recorded video images from the SD Memory Card to the hard disk, or vice versa, with the push of one button, so no computer is needed.

Other new features on both the HDC-SD9 and HDC-HS9 include:

Intelligent Shooting Selection Playback Helps prevent recording errors being viewed during playback, as it will automatically skip over any shots that have serious errors, such as hand swing, fast panning, out-of-focus images or shots of the ground taken when the user forgets to turn off the camcorder.
Advanced 5.1-Channel Surround Sound With five microphones, when recordings are played on a 5.1-channel home theater system, viewers will be surrounded by clear, detailed sound. A Zoom Mic feature lets the microphone get as close as the cameras zoom lens.
High-Speed Burst Shooting at 24 Frames/Sec Ability for the camcorder to take up to 24 consecutive 2.1 megapixel resolution still images in one second or up to 72 consecutive shots in three seconds.
World Timer Handy for travelers this feature makes it easy to set the time when crossing time zones and again when returning home by switching between the two times with a press of a button. Simply select the destination from the display map, and the camcorder is automatically set for that time zone.
0.6-Sec Quick Start Starts recording just 0.6 second from the time the LCD is opened, making it easier to catch those special moments that come with no warning.