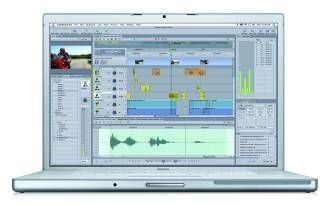 If you haven't read the latest on Final Cut Express 4 drop down a couple posts or click here if that's too much work. While the price drop on Final Express 4 (from $299, now $199) has got us excited, it was revealed that unlike the last version, FCE 4 will not be bundled with Soundtrack. Bummer. Apple's position is that GarageBand (free) will fulfill the needs of prosumer editors who want to create jamming music scores. Good point Apple. But, doesn't that really soften the news about your price drop? Maybe just a little? Honestly, we're not surprised by this decision– the latest Soundtrack Pro 2 is not the best fit for this audience. The good news is, we've been around GarageBand and Final Cut Express enough to know that these two in combo will be sufficient, so don't sweat it if you think you're not going to get your money's worth. We just thought you Soundtrack lovers of former Final Cut Express HD would like to know. For you, it's all about the $99 upgrade.