An anonymous author named Mr. Greenshirt wrote a post on PetaPixel describing a sting operation he conducted to catch the thief who stole his camera.

Mr. Greenshirt is very very fond of his cameras. His main camera is a Fuji X-T2 and describes it as a “bit of a beast.” He also uses a Nikon D600 and when he has to travel he uses his Fuji X100T. The camera has played an important part in his life:

“That camera is a delightful little $1,300 Fuji X100T from 2014, which I purchased with a tele-conversion lens (TCL-X100) to bring the 35mm equivalent FOV up to 50mm (my preferred focal length),” Mr. Greenshirt writes. “I take that X100T everywhere with me. Across the city, across the province, across the country, or across the world, it’s been from Berlin to Spain to Florida to Mexico to small little towns in the interior of my province. Frankly, it sort of blurs into the background of my life, and just goes everywhere with me …”

“It’s got an alarm, it’s parked right in front of the restaurant, and we’re right in downtown in a well-lit area, what could go wrong?” Mr. Greenshirt claims.

Sadly, when they returned to the SUV, Mr. Greenshirt’s Blackberry KeyTwo was missing. The next morning, his friend called him asking if he’d seen his backpack filled with his iPad, work laptop and expensive jeans. This is when Mr. Greenshirt found out that his X100T was miss too.

Between the two of them, they had been robbed of about 6 grand worth of stuff. They reported it to the police Saturday afternoon. And that evening, Mr. Greenshirt’s friend received a call from the police they’d recovered his backpack. The pack contained the iPad, work laptop, and Blackberry. They found it with a guy that was hanging around with another that “was waving a gun around,” according to Mr. Greenshirt. Sadly though, there was no camera.

Mr. Greenshirt spent the next month looking for his Fuji camera, but has no luck. At least until he searched Kijiji and found it: his camera.

“Oh, it was mine, alright,” Mr. Greenshirt writes with confidence. “I could tell from a first glance.”

He sent a message to the account selling the camera asking if the camera was still available. After a few back and forths and the bribery of cheap beer, he convinced the person behind the account the hold the camera for him.

On his way to the town where his camera was stolen, he called the Royal Canadian Mounted Police (RCMP) asking for assistance. At first they said they couldn’t help. However, after some digging, the police department knew who Mr. Green shirt was dealing with. He was known to the police and was known to be very dangerous. They instantly wanted to set up a sting operation with Mr. Greenshirt.

So, the sting was set for 5 pm at the tables in front of a local, not-too-busy McDonalds. The air was a dry cold, and it was already dark out… a perfect night for revenge,” said Mr. Greenshirt.

After about 10 minutes of waiting at the spot, a 20-something guy showed up on an expensive mountain bike. It wasn’t long until the entire place was full of flashing red and blue lights and police officers with their guns out demanding the thief to freeze.

But the man did not stop. He ran with the police chasing him, until he was eventually caught and Mr. Greenshirt was reunited with his baby. 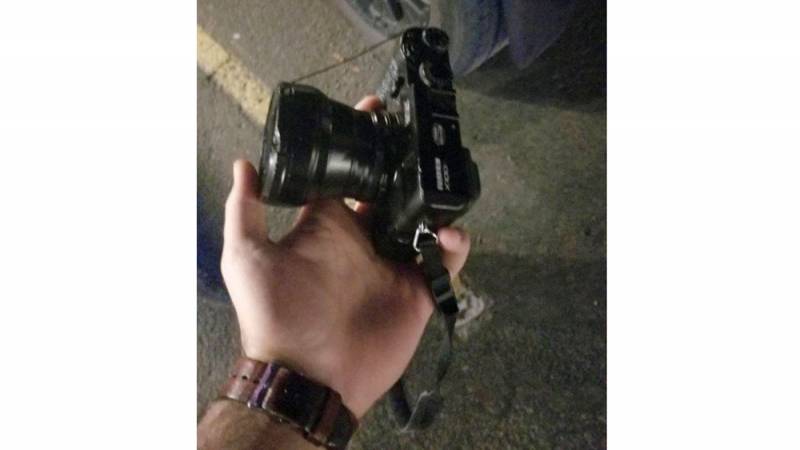