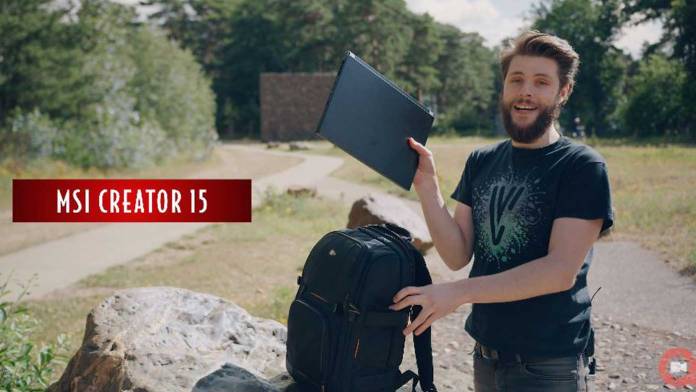 Jordy Vandeput has worked in the video production and content creation industry for years. Although he’s worked on various video-productions as an independent freelancer, he’s invested much of his time and energy into educating aspiring filmmakers.

Looking to educate filmmakers and video editors around the world, Vandeput founded Cinecom. Cinecom is now a successful business, garnering over 2.09 million YouTube subscribers in just a few years, all while educating millions. He and his team create videos that focus on topics such as Premiere Pro tutorials, camera tips, lighting techniques and cinematography lessons. In these videos, Vanderput provides useful tips on better video shooting, post-production tutorials and technology demonstrations.

Because of his long career working as a filmmaking freelancer and online educator, Vandeput has a fair amount of hands-on experience with MSI products. He’s worked directly with MSI. Their relationship has allowed Vandeput to try new technologies and also attend various events.

“Working with MSI is very interesting,” Vandeput says. “They not only introduce me to new technologies, but they also invite me to participate in various events. MSI is always there for me whenever I have questions or even just for a casual chat. This personal level of contact with MSI makes working together very pleasant.”

Why filmmaking and content creation needs a powerful computer

While GPUs are relatively new to the video editing world, and there are some software limitations, they are beginning to play a much bigger role for video editing, visual effects and 3D. Projects with higher resolutions can be taxing on desktops, but efficient GPUs can speed up and strengthen your desktop’s performance. Furthermore, the efficiency of a GPU relies on the number of CUDA cores it has.

“Having a strong GPU allows you to stack more of these effects and work on higher resolutions while color grading in real-time,” Vandeput says. “CUDA cores are like small processors. The more you have of these, the better the performance of your GPU will be for creative tasks like video editing.”

Working with the MSI Creator 15, Vandeput is able to utilize the system’s RTX 2080 Super GPU. In total, the RTX 2080 Super features 3,072 CUDA cores, allowing for a base clock of 1,650MHz and a boost of 1,815MHz. Vandeput can see the RTX series playing a bigger role in the many future video editing workflows.

“Nvidia and Adobe have been working together for a long time now and it’s great to see how their new RTX series plays a bigger role in the video editing workflow,” says Vandeput. MSI also works with Nvidia and Adobe to offer a strong user experience when using the MSI Creator 15. Vandeput, when using the RTX 2080 Super powered MSI Creator 15, he noticed its “increased performance.” That’s due to the work MSI has done with Nvidia and Adobe for a long time.  Together, their partnerships ensure MSI laptops are optimized to run Adobe software and provide the utmost power they can.

CPUs are an important part to every system. Essentially, having multiple CPU cores working together allows your PC to understand the information being sent to it. The MSI Creator 15 is fitted with the 10th Gen Intel i7 featuring 8-cores, allowing it to simultaneously run multiple creative applications.

“For Adobe Premiere Pro, having multiple cores will give you an advantage as the software can run more calculations simultaneously,” Vandeput says.

When working in Premiere Pro, multiple cores allow for the software to run more calculations simultaneously. However, you don’t want to use too many cores.

“There’s a limitation where too many cores might actually become slower and unstable,” Vandeput says.

Adobe recommends 8 cores as ideal, which the MSI Creator 15 has, allowing it to run the Creative Cloud smoothly.

Unlike gamers, most video creators and VFX artists don’t need to have a fast monitor. What’s more important for this group is the monitor’s resolution and screen color accuracy.  A display with a higher screen resolution will show you more of your project because it has more pixels. Essentially the image is sharper. Today, the standard resolution for design display is 4K—3840×2160 pixels. This is an important aspect of the MSI Creator 15’s monitor. It sports a 4K TruePixel Display, which allows Vandeput to more accurately see his projects on screen.

“If you record and deliver in 4K, it’s important you’re able to see that resolution on your monitor,” Vandeput says.

“AdobeRGB covers REC709 and much wider around that. Having such a coverage makes your monitor future proof for when you decide to switch over to a new color space,” Vandeput says.

Jordy Vandeput’s experience with the Creator 15

SD Card readers are important to Vandeput. More and more laptops today have just a few ports and require you to carry around dongles, which ultimately defeats the laptop’s portability aspect.

“When you need to bring dongles with you, the whole ‘portability’ gets lost which is still the main reason for a laptop. This is why I find this SD card reader so important,” Vandeput says. That isn’t an issue for Vandeput with the MSI Creator 15. “It fits in my camera bag without any issues.”

Overall, Vandeput has benefited from the laptop’s added on portability and power — which are very important to him for video editing. “The Creator 15 is not the lightest laptop, but I love how they retain a small form factor making it perfect for traveling,” he says. “The Creator 15 has been a great experience for me. It’s a powerful workstation laptop that replaces my desktop whenever I’m on the go. I don’t feel limited by the performance.”

When asked if he would recommend it to other creators looking for a powerful, portable system, he says the Creator 15 is “a great choice” because it “doesn’t lack any features that [he] might need.”

When it came to the laptop’s video editing capabilities, he found that it “is just perfect.”

“I was even able to edit 5K RED RAW video files in real-time without any issues,” Vandeput says. “This laptop could even replace my desktop for such editing tasks.”

The MSI Creator 15 checks off all of Vandeput’s boxes. It gives him the power, performance and portability he needs to create content that continues to educate inspiring filmmakers and video editors around the world.