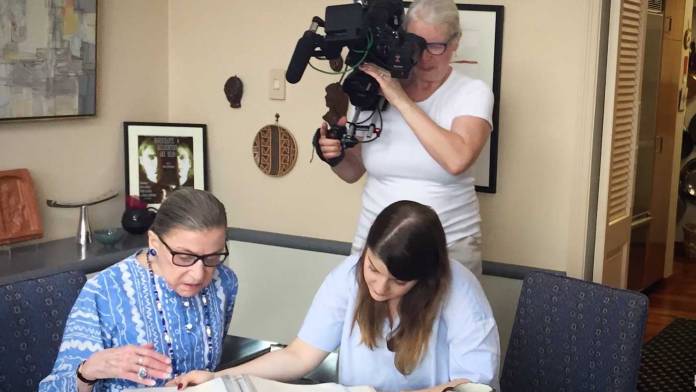 “Access to RBG (Supreme Court Justice Ruth Bader Ginsburg) was very difficult because of her [busy] schedule,” says cinematographer Claudia Raschke. “When you have somebody who is giving you 20 minutes and you’re trying to capture her life story, that’s a lot of pressure.”

Raschke attributes her ability to work quickly to the “tremendous advantages” of using the Canon EOS C300 Mark II Digital Cinema Camera: “How programmable it means you can individualize it to your personal needs,” Raschke said. “The second thing is that it, of course, has a beautiful sensor. Its image quality is just what I needed for this particular project.”

For this project, Claudia paired the EOS C300 Mark II with a wide variety of Canon Cinema lenses – Cinema Zooms, COMPACT-SERVOs and Cinema Prime lenses: “The surprising discovery I made was while using Canon Cine lenses, every lens has a certain kind of a reflectance. The way it ignited the skin tones was a nice surprise. Especially when you have a subject in front of you that is 84, you want to be able to create that certain glow. I just had to use the Canon lenses for that because they delivered it without much to do. They are just brilliant. The craftsmanship of those lenses is just fantastic.”

Along with the recent success of RBG, Claudia is also known for having worked on multiple Oscar-nominated documentary films, including “God is the Bigger Elvis” directed by Rebecca Cammisa and “Mad Hot Ballroom” directed by Marilyn Agrelo. When speaking to how she finds her passion in documentary filmmaking, Claudia told us, “The bottom line for me is always: do I emotionally identify with that story and does it hold my interest?” She continues, “as a cinematographer, you know, it is my responsibility to capture my truth and try to avoid misrepresentation of the situation.”

Claudia moved from Hamburg, Germany, to New York in 1983 to follow her passion for dance. With a degree in fine arts, Claudia found a special connection to cinematography: “Cinematography nourishes all of my artistic needs: I have choreography with the camera movements and my subjects; I have painting with the lights; and I have sculpting by creating three-dimensions on a two-dimensional plane. Every time I pick up a camera and get ready to film, a new adventure starts. It’s a journey into the depths of someone’s life — a unique story that, as it unfolds, dismantles barriers, opens doors and reveals truth. To capture this is an art, which feeds my passion for my work.”

When it came to shooting the interviews for RBG, Claudia used only Canon Cinema Primes. She typically has a set of primes to choose from. “For RBG, we chose predominantly the 50mm and the 85mm because it was always a two-camera setup. You’re thinking of: how can you make the background be cohesive enough for two angles rather than just one? You [have to] think in a very different way of how they can be seamless with one another. From the optics point of view, I’ve never had a problem. They intercut so beautifully with each other.”

Canon now offers seven primes in its Cinema Prime lens family and is now shipping its newest addition, the CN-E20mm T1.5 L F. Similar to all of Canon’s Cinema Prime lenses, the CN-E 20mm covers both full frame and Super 35 sensors. It has an 11-blade iris and a T1.5 maximum aperture. The lens also offers dual focus markings and a stepless 300-degree focus rotation, and its standard cine gears have the same gear positions as other CN-E models.

Claudia Raschke attributes the look of RBG to Canon Cinema lenses. To learn more about the now shipping CN-E 20mm and the rest of the Canon Cinema Lenses, visit usa.canon.com/cinemalenses.