Panasonic has just released its newest box camera — this time, it’s the full-frame Lumix BS1H. If you’re already familiar with the Lumix lineup, this camera’s moniker may seem familiar. Indeed, the BS1H shares many similarities with the Lumix S1H. However, it distinguishes itself in a few key ways — most obviously is its box-like form factor. The Lumix BS1H has the same video performance and capabilities as the S1H. This means it comes equipped with powerful internal recording options such as open gate (3:2) 6K, 24p 4:2:0 10-bit and DCI 4K up to 60fps 4:2:0 10-bit, all without any recording time limit.

Where the BS1H distinguishes itself is in its inputs and outputs. This camera comes loaded with tons of studio and livestreaming connectivity, such as SDI out, timecode in/out, genlock and an ethernet port.

In this review, we’ll discuss the pros and cons of the Lumix BS1H and figure who exactly this camera is for.

While the S1H and BS1H share a similar form factor, Panasonic managed to squeeze a full-frame sensor inside the BS1H. The BS1H uses the same fantastic 24.2-megapixel full-frame sensor found in the S1H. It comes with features like dual-native ISO, 14+ stops of dynamic range, V-Log and HLG, anamorphic video and a plethora of different recording options. In total, there are an astounding 50 different recording options you can choose from. They offer all kinds of resolutions, frame rates, compression and more.

The camera’s 6K resolution mode is the most notable recording option. However, it has a caveat: 4:2:0 color sampling. While 6K resolution support is a nice marketing talking point, it’s a bit overkill for most users. That’s not to mention the 4:2:0 color sampling, which leaves us wanting more. Still, it’s a nice advantage to shoot in 6K because it offers a lot of framing flexibility in post-production. However, the most exciting capture setting, and our favorite choice, is the camera’s beautiful full-frame 4K 10-bit 4:2:2 at 400 Mbps setting, downsampled from the 6K sensor. In this capture setting, the BS1H can record 10-bit with 4:2:2 color sampling, allowing it to record more RGB information and offer quite a bit of flexibility in post-production.

Will you miss having image stabilization?

The BS1H uses the same Panasonic DFD autofocusing system found on other Lumix models. Even though Panasonic keeps making minor tweaks to improve its autofocus algorithm, there is still noticeable focus hunting wobble. In turn, the camera can be inaccurate and slow when grabbing focus on the subject. We did some simple tests with a subject walking slowly towards the camera and walking in and out of the frame. The camera was slow to grab focus and did a poor job at keeping up with a moving subject. However, it’s unlikely any professionals will use the camera’s autofocus, so this isn’t a detrimental issue.

It’s also worth noting the Panasonic Lumix BS1H has access to ActiveTrack when paired with a DJI Ronin RS2 or DJI RSC 2 — without needing the DJI RavenEye accessory.

There are a few profile options on the BS1H, such as V-Log and Hybrid Log-Gamma. HLG offers quite good dynamic range and rich colors without too much fussing about in post-production. V-Log is Panasonic’s logarithmic gamma curve and it provides the most possible dynamic range and flexibility for color grading in post. It is a powerful and helpful tool to have. The BS1H comes with V-Log pre-installed — which can’t always be said for Lumix cameras. In our dynamic range test, we saw 14+ stops of dynamic range.

Shoot assists in the Lumix BS1H

Panasonic did an excellent job providing the BS1H with an array of shoot assist features. Several features are available for use during both internal recording and when outputting a signal to an external device. V-Log view assist is an excellent option to have, and it works when sending out signals via HDMI and SDI. You can also load in some of your favorite LUT presets into the camera.

Similarly, the camera features Hybrid Log-Gamma view assist, which converts your HLG image to Rec 709. It also features a handy red record frame indicator — a helpful feature we’re seeing on more cameras these days. Additionally, there’s an anamorphic de-squeeze, a luminance spot meter and some typical features such as histogram, zebras and peaking.

Next, let’s dive into the BS1H’s menu and its usability. The menu system will be familiar for Lumix owners because the system is unchanged. This is good news for those new to Lumix because its menu systems are very intuitive to navigate. Unfortunately, the entire control interface is much less enjoyable to use on the BS1H versus the S1H. That’s because the S1H has the advantage of touchscreen functionality via its rear screen, which makes changing exposure controls and navigating the menu a breeze. The S1H also has many more external controls, dedicated exposure dials and custom function buttons.

This camera shares a lot of similarities with its two siblings, the S1H and BGH1. The BS1H features an almost identical form factor with the BGH1. Although the BS1H is a box-style design, there’s still quite a bit of ergonomics to discuss. Let’s get the most obvious out of the way: There is no monitor or screen of any kind. It would have been nice for Lumix to add something like the top digital information display found on the S1H to view basic exposure control settings. We’ve seen this on at least one competitor’s box-style camera.

The BS1H has a small form factor, which is one of its selling points. It’s much lighter and smaller than the S1H — making it suitable for drone and gimbal setups. There are plenty of ¼” mounts as well, so you can fully kit out your camera exactly how you like — all without the need for any aftermarket cage or external cheese plates. There are also quite a few custom function buttons on the left-hand side, so you won’t accidentally power off the camera. One quirk we discovered is that the hot shoe is right next to the jog dial used to control all of your settings. Just something to consider when rigging up your camera.

The Lumix BS1H comes equipped with an L-mount. L-mount offers nowhere near the number of lenses options as EF-mount, but the list of L-mount is growing. Lumix does provide a decent lineup of lenses with its S-series lenses — everything from wide-angle to standard zoom, telephoto and fixed focal length lenses. The line includes a 24 mm, a 35 mm, a 50 mm and a 85 mm f/1.8 prime lens. Sigma and Leica also offer a good variety of L-mount lenses, so you should have no trouble finding a quality lens to kit out your camera.

However, L-mount lenses can be big and heavy, which could make balancing on a gimbal a bit tricky. If you’re okay with using a micro four-thirds sensor, then the MFT lens mount on the BS1H will offer you smaller, more lightweight lens options, giving you a lighter and more manageable payload for gimbal and drone work.

The BS1H’s input/output connections are the most differentiating aspect when compared to the S1H. There are a lot of them. First off, there’s a locking SDI output that makes itself useful in many situations. The one drawback to the SDI output on the BS1H is that you can only output up to 1080p. However, the camera does allow you to output a 4K image via HDMI. It’s also pretty nice that Panasonic made it a full-size HDMI port.

There are also other BNC ports, including timecode and genlock. This enables you to synchronize multiple cameras making it an ideal camera for multi-cam setups. Additionally, there’s an ethernet port. The LAN port offers PoE+ (Power-over-Ethernet) with compatible equipment, remote control capability up to 12 BS1H cameras, access to camera functions and settings and other useful functions related to streaming. Rounding out the list of I/O connections is a 3.5 mm headphone output, a 3.5 mm input, a USB Type C port and a 2.5 mm LANC control input.

With all the I/O connections, the BS1H lends itself to be useful for studio setups, livestreaming, and other applications where its compact and configurable design comes in handy. We also can see this camera being useful on gimbals, drones and being tucked away in tiny, inaccessible locations.

Final thoughts on the Lumix BS1H

We think it’s pretty apparent who Lumix designed this camera for. The wide array of I/O connections makes this camera a workhorse for cinema work, studio setups, livestreaming and, to a lesser extent, gimbals and drones. While this camera is the same price as the S1H, there are some significant trade-offs. You get more I/O connections in exchange for all-around camera functionality. If you’re going to use this camera in a studio, on a gimbal or drone, in a multi-cam or livestreaming setup or tethered into your system, then it’s a good option.

However, it’s much more challenging to use this camera in the field and for run-and-gun situations. Meanwhile, the S1H is a more capable all-inclusive cinema and hybrid camera. At the end of the day, the BSH1 is a beast of a camera that’s capable of shooting 10-bit 4:2:0 and 4K 10-bit 4:2:2 at 60fps. It also has excellent dynamic range, good low-light performance, produces a beautiful image and doesn’t break the bank. So, if you need a camera with the I/O connections the BS1H offers, you may want to consider this camera. 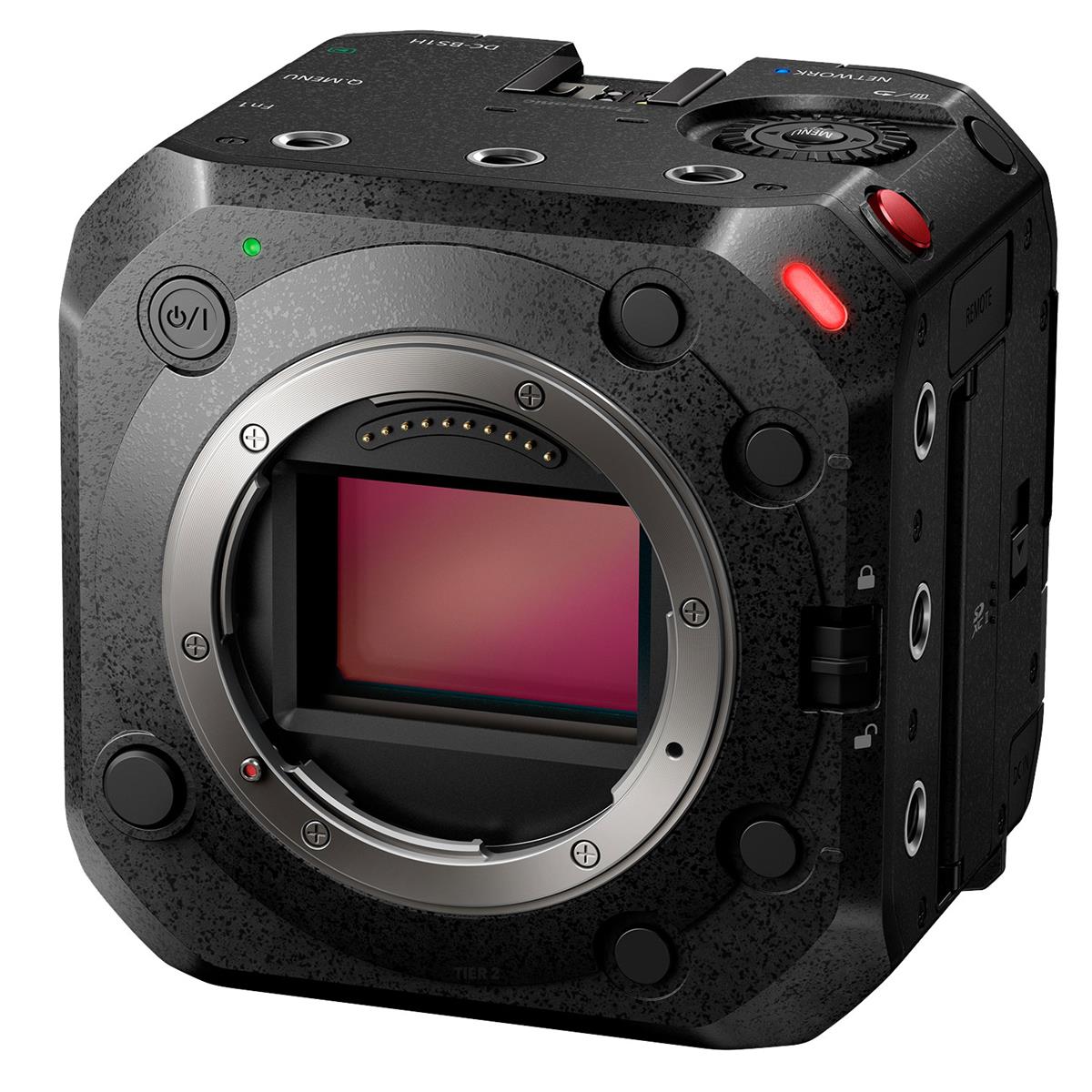