The Rotolight Anova PRO 2 is both a video light and strobe for stills, but how well does it work for both? The light is very innovative; a hybrid light lines up perfectly with the growing market of photographers who are also filmmakers. This bi-color LED light gives you flexibility regardless of the color of light you are working with. It can run off a V-mount battery, so you can use it anywhere. With a CRI rating of 96 and a TLCI of 91, the numbers look promising. On top of all that Its fully dimmable from zero to 100 percent power and can be equipped with optional 6-leaf barn doors.

This thing is stout. Made mostly of metal and some hard plastic and weighing 7.36 pounds, its ready for a long life and hard use.

The Anova PRO 2 has something Rotolight calls CineSFX. These are different strobe and flickers to emulate different practical light. Options include strobe, lightning, fire, TV, welding light and even film flicker. Our only dislike for these features is the clumsiness of the menu used to execute them. Navigating around the menu is difficult even if you know where you’re headed.

We used the light for a few different projects, trying to use it in real world shooting situations. The first use was for an interview setup. Shooting in a smaller room, we had the task of lighting interviews with three different subjects in the same room while attempting to make each shot unique from the last. The Anova PRO 2 was our fill light in this situation. The fill is the light that fills in the shadows created by the key (primary) light and determines how much contrast there is in the image. The fill light is typically a soft light because it’s meant to fill in hard shadows without creating more. The Anova PRO 2 did a good job as the fill — the fact that it’s dimmable made it easy for us to dial in the right amount of light to give us the contrast ratio we wanted.

Next, we used the Rotolight as our main light for shooting products on a product table. The table and background were both white, and our goal was to make sure the white table is over exposed. This eliminates any off-white-areas on the table. However, it requires the subject be in contrast with the white of the table. In the end, the Rotolight helped us achieve the look we wanted — a dark-colored object turning against a pure white background.

A neat feature of the Rotolight is its shape. The reflections of the round light were especially nice when shooting reflective surfaces like the front of a lens.

The review unit we received came in a hard plastic case. If you opt for the barn doors, you might consider the kit that includes the case for $500. It’s a hefty price tag, but keeping your gear safe will save you money over the long run. The locking clasps of the case are easy to engage and disengage.

The yoke of the light gives good movement when needed. It’s a baby pin and is easy to secure. When using a V-mount battery, we noticed that the battery can get in the way of a full range of movement from the yoke, but this is dependant on the size of the battery. We tested it with an Anton Bauer Cine150, which allowed us to shoot for more than four hours without running out of juice. Being able to move the light around without being anchored by a power cable is very nice. This would be a good set-up for lighting at events where power is not as easy to access or would cause a tripping hazard.

If you need to use a filter on the Anova PRO 2, Rotolight made it very easy to swap them in and out.

If you need to use a filter on the Anova PRO 2, Rotolight made it very easy to swap them in and out. With the pull of a couple pins, a filter slides in and is secured. Because the light is LED, having the filters practically on the bulbs isn’t a fire hazard. When equipped with a gel, the fit is so nicely that you could even forget it was there.

As a strobe, the Anova PRO 2 is super handy. It has no recycle time and can shoot high speed up to 1/8000 shutter speed. That means you can do more in less time and don’t have to wait on the light. For wireless control, it has an integrated Elinchrom Skyport HSS flash receiver. If you don’t already have a Elinchrom transmitter, a wired trigger can also be set up. How nice would it be to be shooting video with a light and then quickly use it as a strobe without any more set up? If you are a video and photo shooter, the Anova PRO 2 an exciting offering from Rotolight.

There are many aspects of a light that will determine its cost. The quality of the LEDs, both in build quality and in quality of light, needs to be considered, but the build materials of the fixture also play a big role. The Anova PRO 2 is also very unique because it can be both a strobe for stills and a constant light for video. Let’s look at a few lights you might consider alongside the Anova PRO 2.

The first is the ikan Lyra LB10 for $800. It has a high CRI of 96 and a TLCI rating of 98. It’s also bi-color, though with a slightly smaller range than the Anova PRO 2, and can run off a V-mount battery, but its not DMX controlled and does not offer built-in CineSFX or the Designer Fade option of the Anova PRO 2. Next is the Lumos 300GT-MK-55 for $1,250. Lumos only supplies the CRI value, but its not bad with a CRI of 95. It can also run off a V-mount battery and features DMX control, but lacks CineSFX and Designer Fade options. Last up is the Litepanels Astra Soft for $1,710. It has a CRI and TLCI rating of 98 when in tungsten and 95 when shooting daylight. This light also features DMX control and battery-powered operation. However, you will have to pay extra for the modules that make that possible and the special video features are also missing from this light.

Built rugged, the Rotolight Anova PRO 2 has some really unique features that are perfect for the hybrid shooter. If you need a strobe and a video light, there is loads of value here. However if you just need a video light, there are a few things to consider. If you want a swiss army knife for a light, you should consider the Rotolight Anova PRO 2.

The Rotolight Anova PRO 2 is a round LED light for both video and still use. If you are a hybrid shooter, you’ll want to know about it. 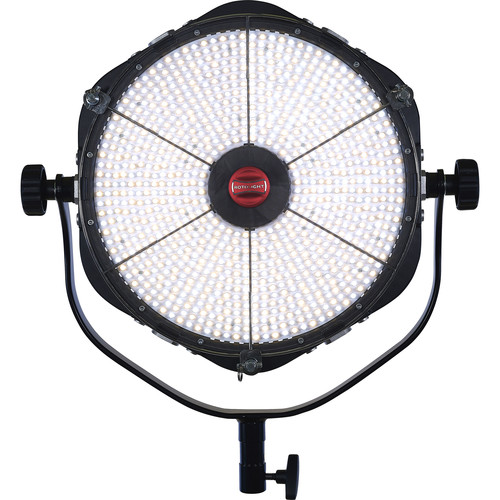 Chris Monlux found perfect natural light in the south of France. He hopes to get to shoot there again soon. He is also Videomaker’s Multimedia Editor. 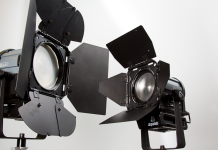 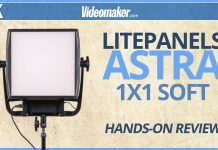