The Panasonic HC-VX1 is an affordable camera with a good looking image, better than average low light performance and UHD 4K recording — all for $800. With loads of light, the image quality of the Panasonic HC-VX1 is impressive, especially for a small sensor. Add in its 25mm to 600mm zoom and three optical image stabilizer systems, and the HC-VX1 shines above the rest. However, it does come with a few features that have us wondering if the Panasonic marketing team was short on options to highlight. Active Contrast and 4K cropping are just a couple of the biggest offenders, but we’ll have more on that later. Overall, with a top resolution of UHD 4K at 30 frames per second (fps) and the ability to capture up to 26-megapixel stills, Panasonic crams a lot of value into the HC-VX1.

The 1/2.5-inch back-illuminated MOS sensor offers impressive image capture even at 12 decibels (dB) of gain. Although at that level there is significant noise, it still has good color reproduction. This means that if you find yourself in a less than ideal lighting situation, it’s likely you will still be able to capture something worth watching. Many small sensor cameras suffer significantly when at that amount of gain, so we expected to have the picture degrade when moving above 6dB of gain. Even when below 0 dB of gain the HC-VX1 has dancing noise in the blacks that increases as you increase the gain, but the color and the image are still detailed.

The camera offers up to a 48 times zoom, however after 24 times, the zoom is digital. A digital zoom is nothing more than a magnification with resolution loss, but with an optical zoom as large as 25mm to 600mm, the need to zoom past that will be rare.

Panasonic offers a few picture in picture (PiP) options on this camera, some of which we have seen before. We first came across Panasonic’s PiP features in the HC-VX981K, reviewed back in 2016. Our conclusion was that it was quite gimmicky and limiting overall. Who needs a burned in selfie view of themselves as they film? However, with the wireless multi-cam smartphone function on the HC-VX1, you can connect up to three smartphones to give a PiP in each corner. Because the other cameras are not connected to the main camera, we could see some unique ways to use this feature. Say you were recording a chef on a cooking show: you could have a wide shot of the host and a closeup of the food being prepared in the same frame. It’s not going to be an award-winning feature, but it’s a big improvement over what was offered in the HC-VX981K.

To use PiP, the Panasonic Image App needs to be installed on the smartphone. Using an Apple iPhone 7 Plus, we connected to the camera with relative ease. The feature requires the phone to connect to the camera’s Wi-Fi network. We did find that connection was more difficult to maintain if it was competing with a Wi-Fi network with a stronger signal. But after forgetting that stronger network on our phone, the camera’s Wi-Fi worked well. Each time you set-up, it requires the phone to connect again. That means, if you are going to turn the camera or phone off, each time you turn them on again you will need to reconnect them.

The HC-VX1 has three O.I.S. systems. Panasonic describes the first, 5-Axis Hybrid O.I.S. +, as a five-axis correction to thoroughly suppress blurring all the way from wide-angle to powerful zoom shots. The second, Adaptive O.I.S., claims to automatically optimize the O.I.S.’s effectiveness by adjusting the O.I.S. mechanical controls to various shooting positions, conditions and user characteristics. The last O.I.S. system is Ball O.I.S., which Panasonic says reduces wear on the drive section and greatly improves correction for small-amplitude hand-shake. Because the camera is so small, good image stabilization is key. We liked how they all worked — a big plus since, when fully optically zoomed to 600mm, good stabilization is a necessity.

The optical zoom on this camera will be your friend if you desire a shallow depth of field (DOF). Because of space compression when shooting telephoto, video shot when zoomed in will have more visible background blur. The image is very nice when wide, but like other small sensor cameras, shallow depth of field is out of reach. Because it looks very nice, a good user for this camera would be someone who doesn’t need shallow DOF, but wants a nice crisp image with good color. Shooting sports would work well because of the length of the zoom and the wide DOF.

This camera is also a good fit for esports or for other streaming needs. It’s simple to use and gets a good image, making it a good addition to a multi camera shoot. Its smaller data rate means that you won’t be filling up your storage drives as quickly as many other 4K cameras. Additionally, the files are easily handled by all major editing programs.

This camera is truly consumer, and is designed for video shooters who may not do any editing after shooting. This camera is packed full of features that are intended to appeal to that type of user. Take 4K cropping as an example. Panasonic says when shooting in 4K, your subjects will stay framed, without blurring, because you can edit the images in the camera and save them in full HD. This is just in-camera cropping. This is easily done within most major video editors. Instead of doing it in-camera, we suspect most of our readers will shoot in 4K, then crop and resize the footage in post for an HD render.

This camera is truly consumer, and is designed for video shooters who may not do any editing after shooting.

Next up, is Active Contrast. Panasonic says it automatically equalizes the gradation in response to the brightness distribution within the image. In practice, the image shot with it on or off offers very little difference. At best, it lifts up the shadows, but because it’s automatic, it can do this in an undesirable way. When shooting video of a person, we found that the auto contrast made the skin tone blotchy. This is another feature that is better left to the editor.

Panasonic describes another feature as a Cinema-Like Effect that allows users to produce a Dolly Zoom and other professional-like shooting techniques used in cinematic films. A push in or out dolly shot works because it changes the perspective of everything in the frame. The Dolly Zoom this is just an auto zoom. At no time would this pass as a dolly shot. The interesting thing is that along with dolly zoom, there is an auto zoom feature that does exactly the same thing. The only difference is the name.

Then, there is the level shot function. Panasonic says it automatically detects and corrects the tilting of captured images. However, it’s just an overlay showing you where level is. The automatic part of this function is that it tells you when you’re level — that’s it.

The last feature is one that works properly and is true to its name. However, the 5.1-Channel Wind-Shielded Zoom Mic is not a feature that is required for this type of camera. It’s not likely a user owning a camera of this level would need or know what to do with 5.1 audio.

To test the low light performance of the camera, we shot at each gain level to see when noise is introduced. At all gain levels, noise is in the picture. It’s seen dancing in the black or dark areas of the picture. For a sensor this size, that’s to be expected. But with the back-illuminated sensor, even at the highest dB of gain, the image still looked alright. Did it have noise? Yes, but outside of that, the image didn’t degrade that much.

Yes, this camera has rolling shutter, but it’s not bad. Pan too quickly and vertical lines will bend, but the effect is by no means bad. It even has a nice feature that gives you a warning if you’re panning too quickly.

The moiré, however, is quite significant; fine lines dance and during panning or tilting, it’s very noticeable. Stay away from shooting subjects with fine lines, like on clothing. There is nothing worse than shooting a beautiful shot only to have the viewer’s eyes distracted by the lines on a shirt.

You cannot manually focus this camera. Autofocus is the only way to get a subject in focus. In some difficult shooting situations, like shooting a strongly backlit subject, we did find it struggled to find what we wanted in focus. However, with a bit of reframing and some patience, it identified our subject and got it in focus. We experienced a little bit of hunting between two subjects that were close together in the frame but not in the same focal plane. We didn’t see any hunting from the subject to the background. That kind of hunting would be unusable.

Panasonic states that the battery will last an hour per charge. If you require more than one battery for your shoot, you’ll haveto use the camera to charge it. This means if you find yourself without an extra charged battery, you’ll be out of luck. You are able to run the camera off a wall outlet, however.

Panasonic offers two other cameras with the same sensor. The HC-WXF1 includes an EVF, has the twin camera and costs $1,000. Otherwise, it’s the same camera. The twin camera is not worth paying for, but the EVF would be handy in some shooting situations where the monitor is difficult to see. On the other side of the HC-VX1 is the HC-V800, which shoots up to HD for $600. The resolution is the only difference, so if you don’t need 4K, you can to save $200. A separate battery charger is not included with any of the three cameras; instead the camera’s battery must be charged using a USB cable with the camera as the charger.

We looked at the marketplace for 30 fps UHD 4K shooting camcorders for under $850. There are two options, the Sony FDR-AX33 and the Panasonic HC-VX981K. For $850, the Sony FDR-AX33 also shoots UHD 4K but captured a bit smaller stills at 20.6MP. The optical zoom is half that of the HC-VX1 with a 35mm equivalent of 30mm to 300mm zoom. The AX33 touch screen is a half-inch bigger, and the camera offers NFC connectivity.

The Panasonic HC-VX981K costs $800. This camera uses a different sensor of the same size, and the zoom is also similar. They added another O.I.S. system in the HC-VX1, but the screen is a half-inch larger on the HC-VX981K.

There are two things that surprised us with this camera: its image quality when given an abundance of light and its ability to have a decent image all the way up to 12 dB of gain. It’s packed full of either poorly named or poorly executed features, but, for the money, you get loads of options and a versatile camera.

The Panasonic HC-VX1 is a good all around camera. It shoots 4K and has a 25mm to 600mm zoom lens. If you need 4K on a budget, this camera could be for you. 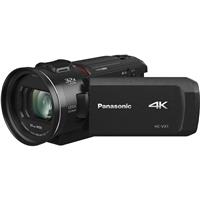 Chris Monlux has owned more than two dozen pairs of Birkenstocks in his life. He is also Videomaker’s Multimedia Editor.