The first word out of my mouth while flying the Autel EVO was “Wow.” It flies so well that you’ll react the same, even if you’ve never flown a drone before.

Your reaction will be the same as mine: Wow, that was easy. Add in an up to 30 minute flight time and easy-to-use controller and the EVO screams value.

The camera on the Autel EVO can shoot up to 4K video at up to 60 frames per second at a bit rate of 100 megabits per second. With its three-axis gimbal and intelligent flight modes, we found the video to both look good and remain stable when flying.

Before flying, the Autel flight control app needs to be installed to an Android or iOS device. The EVO comes with two cables for different types of USB connection but doesn’t come with a cable for Apple devices. With an iPhone 7 Plus and its charging cable, we were ready to fly.

Flying with a slight breeze, EVO didn’t move off its initial take-off position. It just waited for my control. Our first flights with a new drone are for getting a feeling for flying. Outside of having the camera recording in auto exposure, we didn’t focus much on capturing good video. Instead, the images took the backseat so we could have a bit of fun flying.

We wanted to test how well the EVO flew around obstacles and when close to the ground. The controller is very tight, and small, granular movements are easy to achieve. We had no issues safely flying near objects. Not only does it look like the DJI Mavic Pro, but it flies like it too — in some cases even better.

Once we found the controls to be in good order, we whipped the EVO around in the air all via manual control. Starting near the controller and flying up and out to reveal the landscape around us, I took video of the outside of Videomaker World Headquarters. We were also able to manually circle a point of interest.

Because each flight was so simple, we reached out to some of our staff who had no flying experience. With a quick tutorial, they were off.

Because each flight was so simple and responsive, we reached out to some of our staff who had little to no flying experience but wanted to learn. With a quick tutorial, they were off. Because the drone stops its flight path when you let go of the controls, its an easy drone to learn on. If you feel like you’re going to run into something, it’s likely you will be able to just let go of the controls and it will stop in time.

Our first flight was 27 minutes, but each time we depleted and charged the battery, the flight time increased. Depending on the type of flying and the amount of wind EVO, flight time will vary. We saw at minimum 26 minutes during high wind. The best flight time we experienced was 30 minutes.

Like any drone, we recommend you have multiple batteries, so you’re sure to have enough time in the air to get your shot. Both the controller and battery can be charged at the same time. We saw four flights before the controller needed to be charged, though we’d recommend charging it to be safe.

In the air, the EVO is quite nimble, and even with the collision sensors on, it flew fast and had great response. The top flight speed is adjustable in the app menu. Labeled Ludicrous, the upper limit of 45 miles per hour was a bit too much to handle. If you don’t need your camera to move this fast, we recommend using a lower setting.

To our surprise, there was only one firmware update during the review period of four weeks. The best part of the update is that we didn’t need it in order to fly. We got the notification just prior to flight, but because Autel listed what was in the update clearly, we knew we didn’t need it urgently. Updates have been a recurring pain-point in our experiences with other drones. With just about every DJI drone we have flown, a firmware update has prevented us from flying at some point during our review.

Starting with dynamic track, we flew up to about 80 feet and used the app to try out the autonomous tracking flight modes. EVO tracks objects with amazing effectiveness. Tracking worked so well, we couldn’t even trick it. By far, the tracking on the EVO is better than that on the DJI Mavic Pro.

Viewpoint was next, and it also worked great. This mode lets you set a point of interest to keep centered in the frame. We also tried out Waypoints, and it worked as expected. If you need a good shot but are bad at flying, this mode will fly for you. Set each point and then let the EVO fly on its own so you can focus on the shot.

Not all of the intelligent flight modes worked well, though. Orbit is very weak. The EVO has a hard time keeping the point of interest in the frame, and it couldn’t keep up with the pan, causing the frame to bounce from left to right. With some manual help, we were able to get a good shot. Also, Autel claims this issue has been resolved in the latest firmware.

The image quality from the EVO is good. The bitrate is 100 Mbps in 4K 60fps, so even when flying fast, tearing isn’t an issue. The EVO can shoot in log, which is a very nice option for advanced color control and a little bit more dynamic range. We preferred to shoot in manual exposure and in log over the auto option. We felt it didn’t do as good as a job as we could in choosing the proper exposure.

DJI owns the majority of the digital imaging drone market, but the EVO is well worth considering. So, if you go with the DJI Mavic Pro, you will get a drone with similar flying characteristics and image quality. They are the same price at $1,000. Yuneec also offers a collapsible drone, the Mantis Q, though details on that are not yet available.

Outside of orbit mode, the Autel EVO really impressed us. It’s the same price as DJI’s offering, and its tracking is better. Overall, the EVO is simple to fly and captures good video. 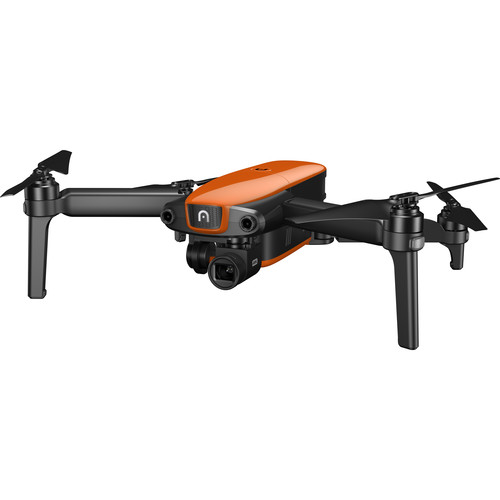