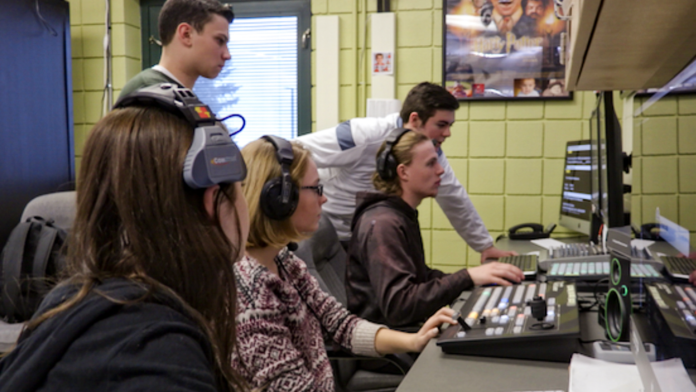 It’s election day 2016 at Penn-Trafford High School; all the student voters are heading to the voting booths in the library, and Penn-Trafford’s video production class is there to cover it all. But this isn’t your ordinary video class. No; this is an award-winning live broadcasting crew that just so happens to be made up of teenagers.

Penn-Trafford Mock-Election Day coverage was a huge feat for this Penn-Trafford broadcasting crew and their instructor Steve Vinton, so much so that it landed them with a nomination for an Emmy Award at the 2017 Mid-Atlantic Regional Nominees in the Student division, High School Newscast category. But this kind of success doesn’t just happen.

Over the eight years that Vinton has been working at Penn-Trafford as their film and TV production teacher, he has had to overcome a lot to make his school’s broadcasting program what it is today. He knew that his students already had the talent to operate their own live broadcasts; it was just a matter of getting the equipment that would allow them to do that, which ended up being NewTek’s TriCaster® and NDI® technology.

“When I started, we didn’t even have a TriCaster,” Vinton recalls. Before Penn-Trafford’s video production class invested into NewTek TriCaster systems, they were confined to creating pre-recorded morning video announcements for the high school, a daily task for the student production team.

It wasn’t until a few years into the job that Vinton got the ambition to make these announcements live. He wanted the morning announcements to be more timely and relevant, and after his class won two grants landing them with 25,000 bucks, they were able to do just that.

With the grant money, he bought a TriCaster 460 from NewTek, setting the course for what Penn-Trafford’s production class is today.

“That’s what really was the genesis of the television production track of the curriculum,” Vinton says. “Prior to that it was just video all lumped together.”

Today, Vinton’s class have both a NewTek 8000 and 460 TriCaster — the 460 being their mobile unit. Every day, they utilize NewTek’s NDI technology and NDI Camera app, which allows them to transmit video and audio back to their TriCaster from anywhere in their district’s network.

NewTek is changing the lives of Penn-Trafford’s students

“I’ve had many students tell me that, as Freshmen, they were able to step in and have leadership roles,” Vinton says. “In fact, this year one was the first ever freshman producer of our number one show, which was called Colonial Sports Center, because he knew the TriCaster. As soon as he got there, they were like ‘this is great; get to work.’”

Everyday at Penn-Trafford, Vinton’s students have about half an hour to construct a 7 to 10 minute morning broadcast, and every other week they produce a midday show that covers things happening in the school and the community. They obviously have to have comprehensive, yet easy to use gear that will allow them to do the work that professionals are doing. For Vinton’s students, NewTek’s TriCasters aren’t intimidating to learn, and the technology allows their talents in video production to flourish.

“It was easy to learn. It was easy to use. It made sense,” Vinton says. NewTek TriCasters were so easy to use that the students in one of Vinton’s beginning television classes, who had never handled a TriCaster in their lives, were confidently broadcasting an 8 minute newscast in two class periods.

NewTek’s products give Vinton’s students a way to hone their craft and get job experience, but most important, NewTek allows them to make something that they are all proud to be a part of.

“… Because of NewTek’s software, especially NDI, our show has evolved over the last two years into something that we’re very very proud of. I think it looks very professional. ”You can learn more about NewTek’s line of products, including their TriCasters and NDI technology at newtek.com.